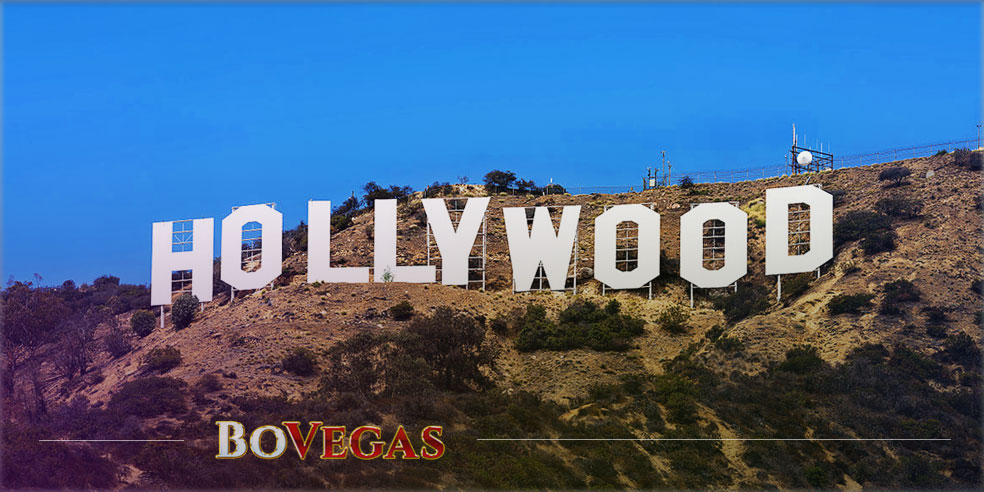 Hollywood is a glittering monument of fame and fortune, rising on the oceanfront. This place attracts millions of people with its bright lights and promises of a glamorous life of luxury. It has always been the destination that everyone dreams about. Its atmosphere is so tempting that we are trying to get closer to this world by any means possible. We watch Hollywood movies, keep track of Hollywood stars and sprint out like billy-o when a new blockbuster comes out on the big screen! And there is a way of bringing that vibe closer or even winning real wealth. If you love watching movies and playing slots, you can combine these two enjoyable activities with some authentic images, video clips, and music from feature films. You can play any Hollywood-themed slot game you choose, and maybe even win a jackpot to help you make your first trip there. Online casino software providers are trying to get profit from the “movie rush,” in order to turn it into entertaining games that will immediately be loved by gamblers all around the world.

In this article, we will introduce you to 10 the best film-themed slots games with some most ingenious and unique features that help bring the theme to life. We will talk about games devoted to favorite movies and Hollywood icons. 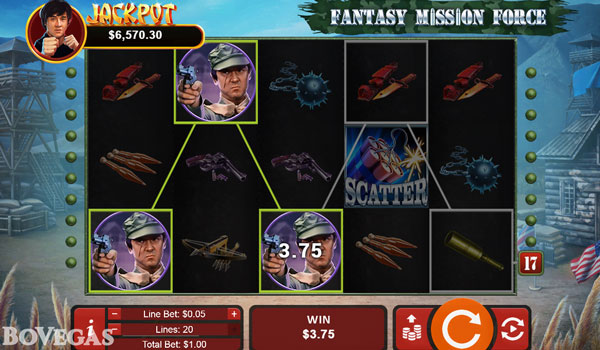 Fantasy Mission Force, based on the 1983 cult film of the same name, tells the story of a Dirty Dozen-style group of misfits soldiers on a rescue mission to bring back four Chinese generals from the hands of Japanese forces. Fantasy Mission Force video slot features various characters from the movie, including the undisputed legend of Hollywood Jackie Chan as Sammy and Chinese star Brigitte Lin as Lily.

You can play Fantasy Mission Force on desktop PC or mobile phone both for free and for real money. This slot offers x2 wild multipliers and free spins bonuses. Coins start at just 0.01, but the top bet of 5.00 – or 100.00 with all 20 paylines – caters to all gamblers. It shows actual footage from the film. And the most pleasant surprise the maximum payout gamers can expect in a single spin is 50,000 times the line bet! 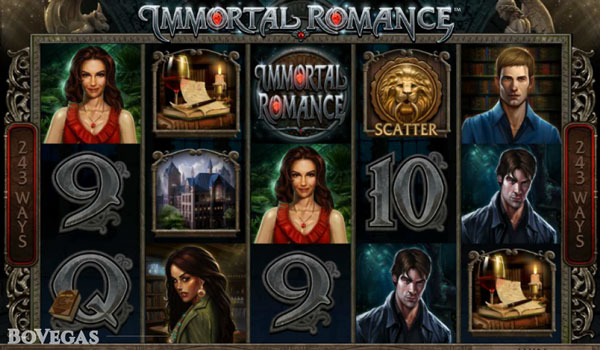 People seem to be crazy about vampires and dreams of eternal love. The vampire ideology is widely used in Twilight movies and TV series True Blood or The Vampire Diaries. Bram Stoker would be proud of Gothic Immortal Romance and design developed by RTG designers. Victorian style, classic vampire attributes like mist, tombs, blood on the reels are essential for any good vampire story. You can expect to come across features such as five reels and 243 pay-lines, multipliers, free spins, and wilds.

When you land 3 Scatter symbols or more anywhere on the reels, you will trigger Free Spins feature. Once triggered you will be awarded with 10 spins. 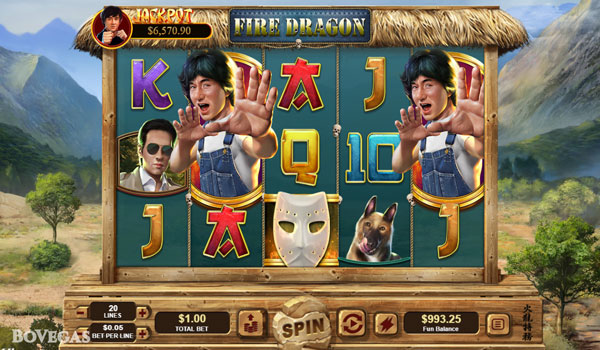 Fire Dragon is an Oriental-themed slot machine and the third slot game in the Jackie Chan series offered by RTG. You will find reasons to test it and win up to a whopping 50,000x your line bet in the game’s highest fixed jackpot. And the main bonus feature of Fire Dragon Slot is the Free Spins and Wilds coming with slots. Fire Dragon slot is a real blockbuster with martial art stunts and frantic car chases. The game stands apart with its outstanding graphics and audio effects.
The Ninja Masks is a great symbol: it doesn’t matter where it lands! It will trigger 10 free spins, so with this one, a potential win really does seem just around the corner! 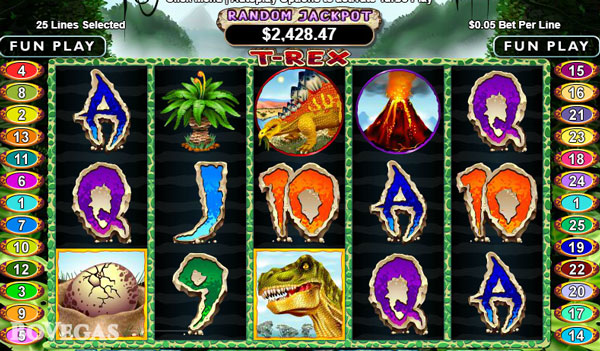 RTG’s dino-themed T-Rex video slot is one of the most popular slot machines inspired by the Jurassic Park movie. The game will make you go back in time and meet the biggest and most bloodthirsty and fearsome T-Rex.

Bright, catchy images on the reels as the Dino Egg, the Volcano, and a variety of prehistoric plants and dinosaur species create a unique atmosphere and really do bring you back to the prehistoric era for a while. The Egg is the Scatter symbol and prizes with the T-Rex Symbol in winning combinations are doubled. 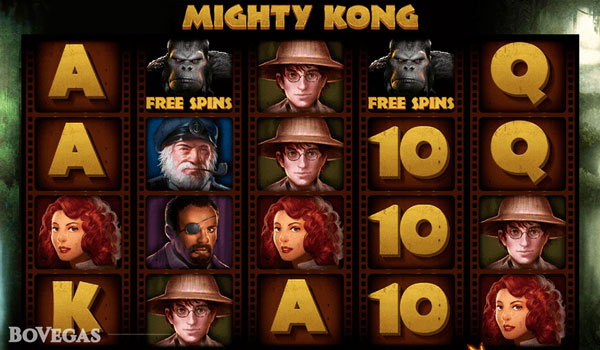 The story of King Kong is powerful enough to have inspired designers to create a new enticing version of slot game. The action takes place in a wild jungle, a place where five researchers have found themselves on Kong Island. High-quality graphics, realistic landscapes, and tall waterfalls make the game very atmospheric, authentic and believable. Deep in the jungle, there are many hidden dangers: Mighty Kong offers Free Spins round, where you can select up to 40 Free Spins, 13 Free Spins with a x3 Multiplier, eight free games with a x5 Multiplier or 5 free games with all wins multiplied by 8. 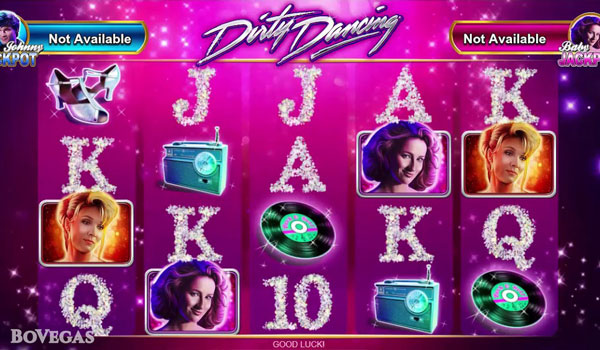 Remember the hot duo of Patrick Swayze and Jennifer Gray? If you’ve seen this movie classic of the ’80s, then be ready to relive one of the greatest musical comedies. The dirty Dancing Slot game has 40 lines, and the bet level can be set from 0.01 all the way up to 10. Dirty Dancing is a great game thanks to the full range of bonuses and wilds the developers have built into it!

The main characters of the movie, Johnny, Baby and Penny, authentic imagery and glittery pink background, all look very 80-ish. Just dance on the reels and get your win! 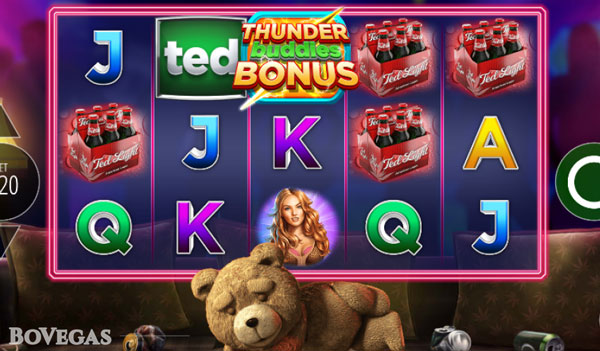 TED is the bear from 2012 comedy film “Ted.” And the eponymous slot game was made to make you laugh! Ted is all about fun! Ted is wild and irresponsible, he drinks and throws parties with all sorts of people. This video slot has five reels and 20 paylines. And party symbols on the reels will create a particular party mood. 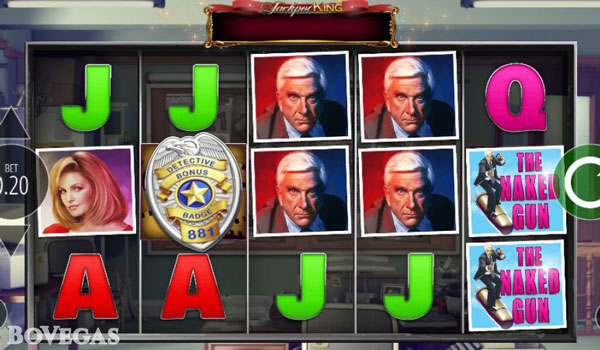 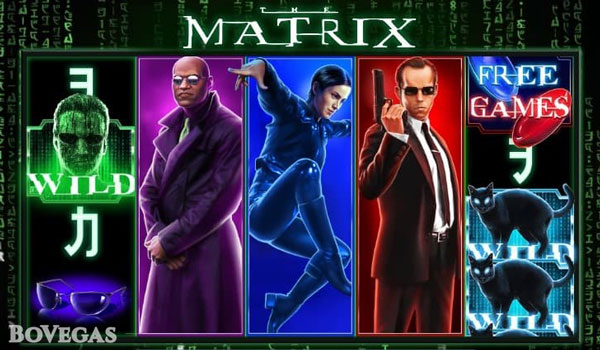 The Matrix, released in 1999, became a cultural phenomenon. The simulated reality created by the Wachowski sisters continues to inspire software providers to develop new products. Matrix Slot is the mix of dystopian and computerized visuals. Gamblers all around the world have the opportunity to play this game on any smartphone or tablet device they like.

A standard wild symbol helps to make winning paylines wherever possible, as well as elements like telephones and sunglasses, as well as main characters like Trinity and Agent Smith. 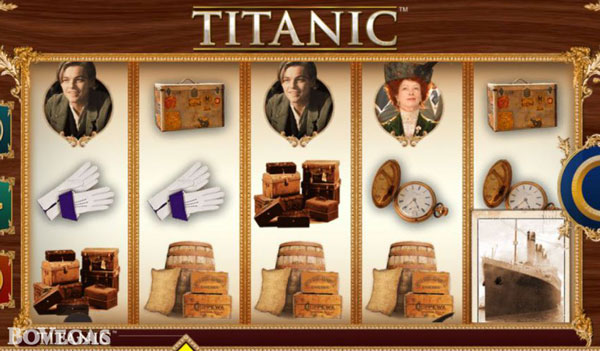 As you might guess, the Titanic slot machine is viral among gamblers. The pompous and charming atmosphere of the film fully corresponds to the game. You always have a chance to win a mystery jackpot. When you hit a bonus round as the ‘mystery feature,’ you can enjoy listening to the most romantic soundtrack in the movie history. You can get one, two, three, or even four wild bonuses leading to some big win chances. So your ship will be lucky! 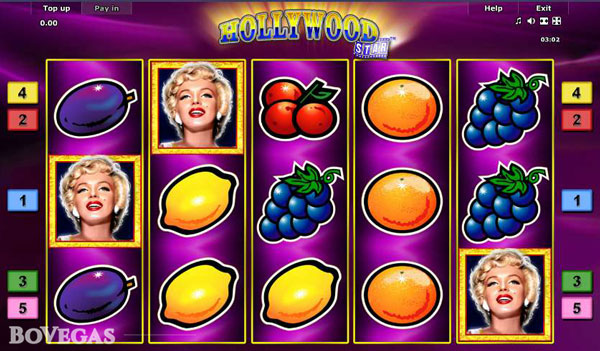 This glamorous game belongs to the classic slot machine genre. Since it shows an image of Marilyn Monroe, one of the most vivid images of Hollywood, this game will always be in demand! It will definitely appeal to fans of retro style. The vivid images of fruit and well-executed animation give the game a sense of realism. The theme of the game is based on fruit symbolism, and beautiful Marilyn Monroe points to the slot feature. The main thing is that despite the small number of game elements, this slot may still provide you with some really big winnings!

Brightest Gambling Masterminds: They Get the Industry Going!

It’s pretty clear that any social or business phenomenon ultimately owes its emergence and development to the excellence and creativity of some eager go-getters. Any exciting new trends in our lives have been fueled by the relentless energy and intelligence of all these great thinkers and doers who are themselves driven by a deep-seated need […]

This controversial topic has attracted the attention of the media in recent years, with the rise of online gambling and online games. Many young people are getting involved in it, as some respective websites don’t have any age verification procedures. Skin gambling uses skins for video games, mostly for Counter-Strike: Global Offensive. Let’s investigate the […]