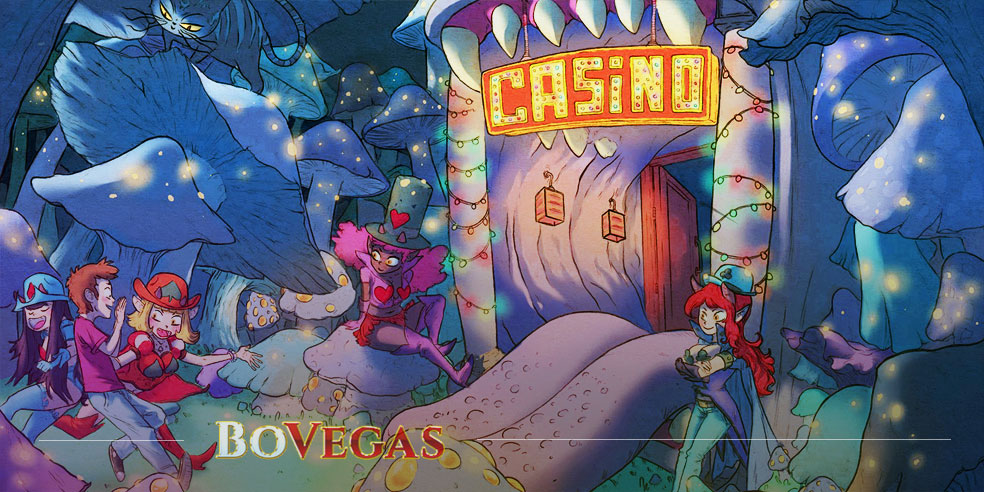 Japan is a country where gambling is prohibited, but that doesn’t stop its animators from popularizing it in their cult favorite anime productions! When people think of cartoons, the first thing they think of are childish movies, with a simple plot and funny dialogs. There are no real unexpected twists in such shows, which are full of fantastic beasts and fluffy characters.

But the world of anime is totally different from the Hollywood world of animated films. The spectrum of emotions in these works of art can be astounding, and the heroes usually deal with real-life problems, even though their storylines may take place in universes that have never existed in reality. In fact, anime is considered to be a film genre aimed at entertaining both adults and teenagers! The seriousness and the brutality of specific episodes have helped anime distance itself from the jolly and sometimes silly toons that children watch, creating a unique cultural phenomenon that is adored by audiences of different ages.

Before we dive into the penciled universe of Japanese cartoon characters, you need to understand the essence of the word “anime” (アニメ). Surprisingly enough, the term itself derives from the English word “animation.” The Japanese shortened it, and since then, they have called any cartoon “anime.”At the same time, foreigners used it for specific Japanese animated movies with a dark atmosphere, vivid colors and explicit dialogs. At present, fierce discussions about the origin of the word “anime” are a commonly encountered phenomenon among most dedicated geeks.

But enough said about the general notion of anime! Let’s see what makes these movies so distinctive. First of all, anime production is rather cheap, because different cartoon frames have similar parts, and redrawing them several times makes no sense. You can notice that the same shots and facial expressions of the characters are repeated over and over in these films. This is because the artists don’t create additional cells to show the motion on the screen.

Imagine that your comic book came to life and was put on the screen. Well, the same thing happens with anime! The motion here is exposed in a big shot and extreme close-ups, while the overall background remains still. This lack of fluctuation is what makes Japanese anime so special, embracing the glorious heritage of the “manga” style graphic novels. The bold style of anime has been always in the spotlight of the major media production companies.

The boundless imagination of these comics stories evolved into the full-scale shows and episodes, where anything is possible. Due to this, gambling emerged in anime in new vibrant colors.

Before you start watching gambling animes from our list, you should be aware of two different kinds of them. They come subbed and dubbed. The difference between these two is that subbed versions use the Japanese language followed by subtitles in your native language, while dubbed ones have voiceovers in different languages. The next time you hear Japanese dialogs in your anime, don’t be surprised; maybe that’s just the way it should be!

This is the story of the young rowdy directed by Yuzo Sato. The show was broadcast in 2007 and has 26 episodes of 23 minutes each. The main character Kaji likes high stakes and hates big losses. He gambles all nights through, plunging into the indentured servitude of Tokyo’s underground world.

This bodacious player has signed up to a 3,850,000 yen loan; together with his coworker, who turned out to be a scammer. As the debt takes its toll on him, Kaji receives a splendid opportunity to pay off the loan. With the help of a stranger, he boards the Espoir (which means “hope”) on a 4-hour cruise, where miserable gamblers like him gathered for some kind of a card game, in order to get some massive profits!

At first glance, there is nothing dubious about this plan, but the game turns out to be much darker than expected. Now it’s a matter of life or death for Kaji! He is trapped by the violent and sneaky authorities of illegal gambling. To get through this dangerous gaming experience, Kaji will have to grow up from being an idle, sluggish player into a real master card sharp! The style of this anime is sharp and craggy, making it hard to follow the storyline. However, once you get used to it, you will not be able to resist taking a glimpse of the next episode! 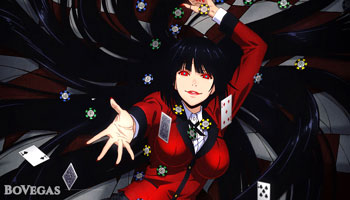 This anime about Hyakkaou Private Academy is directed by the talented Yuichiro Hayashi, and the plot was written by Yasuko Kobayashi. This twisted thriller has so much to offer in its short 12 episodes. This establishment can be easily treated as a land-based casino; especially at night! Underground gambling is booming behinds the walls of this place, where the future masters of the world meet to gain or lose huge fortunes overnight.

Yumeko Jabani is a novice to the academy rules and undercover life. She is introduced to them by unlucky punter Ryouta Suzui, who considers her to be far too naive and childish. However, everything changes when Yumeko begins to win in every game, tearing down the rigged system that is run by the cheating student council. The interesting thing about Yumeko is that she is more excited about the process of the game than about her winnings! It’s hard to trick her, and she has a keen nose for cheating; so this is why she smells blatant lies straight away.

This story of a young student high roller is something worth seeing and exploring. Maybe this girl’s drive will boost your enthusiasm to try your luck in some table games. 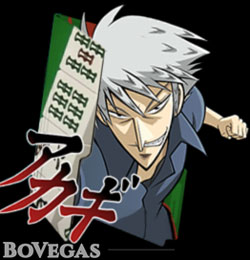 This classy movie was created back in 2005 by Nobuyuki Fukumoto. Its 26 episodes will take you on an adventure with a gambling genius, Shigeru Akagi.

After running away from the police, this young teenager ducks for cover into a yakuza mafia den, where he decides to step into the game of mahjong instead of one of the losing guys called Nangou. Despite the fact that Akagi had never played mahjong before – he won the game without any clue about the rules! Imagine yourself playing in a casino for real money without a clue about blackjack or roulette. It’s pretty scary, isn’t it? But for Akagi winning, comes is a natural instinct, and he can play anything without any knowledge!

His talent becomes recognized in the gambling underworld. Akagi grows up to become the most vicious and cold-blooded mahjong player you could possibly imagine, who manipulates people’s lives and destinies. His calculations are always right, and he never stumbles on his path to win. His combinations and logic twists will make your blood pump faster. This nail-biting story of the young cruel thug keeps the auditory in suspense until the end of each episode. Nobody can faze him, and no one is good enough to beat him! 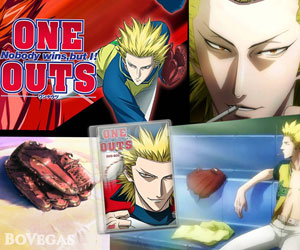 Gambling comes in different styles and forms, and now it’s sports betting that is going to be put on the big screen. The entire 25-episode story of Toua Tokuchi is dedicated to baseball. And yet, Toua is not a gambler himself. He is a player to bet on. This tough nut has to prove his fans and bookmakers that he is worth something.

The “One Outs” anime, directed by Yuzo Sato in 2008, tells of an outsider baseball team called Saikyou Saitama Lycaons. To pay off their debts, the team hires young and overconfident player Toua Tokuchi, who has to participate in the one pitcher vs one better game. According to the contract, every out will make him 5,000,000 yen richer, and every point puts him in 50,000,00 yen debt.

The stunning confidence of the main character can’t but be appealing to the audience, and his success is something far beyond impossible! 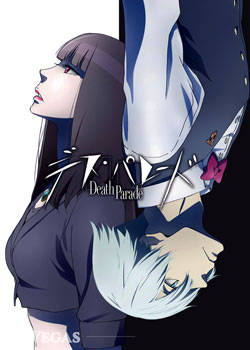 What if there was no paradise or hell, but only gambling? It’s not hard to imagine this when you watch Death Parade. Twelve episodes from the life of the tacit and cold-blooded bartender Decim, who runs the Quindecim bar, will show you an extraordinary concept relating to those two big human concerns: life and death!

The choice between reincarnation and oblivion is intimately related to the outcomes of the games of chance designed by this mysterious barmaster. Directed by Yuzuru Takitava in 2013, Death Parade presented the idea that dead people have to gamble their way into the happy afterlife. This totally changes the classical perception that everything is defined by deeds and hard work. Well, it’s hard to deny it actually would be pretty funny if we could make our way to paradise by playing in an online casino or placing bets on the outcomes of some kind of life event!

Sometimes we search for inspiration to continue playing our favorite online casino games, but nothing comes to mind. Try to bring up your childhood memories and search for the good mood and ideas in anime. We bet you’re gonna love it!

Why Slot Games Are the Best in Any Casino

Millions of offline and online gamblers in American casinos seem to be besotted with slot games! What explains this craze? It seems that such games are the most accessible and fair of all of them. However, there are many other factors that get tempted American gamblers hooked on the reels. Software developers are trying to […]

Slots tend to be the most well-liked games among online casino audiences. These virtual analogues to real-life gambling, like their mechanical precursors that once conquered the world of gambling, are now deemed to be the leading option for the majority of casino fans. In this online slots guide, we are going to cover all the vital […]

Regular gamers will hardly be surprised to learn that poker is one of the leading games of today’s gambling industry. Poker has already been established as one of the prominent hallmarks of gambling up to now; and it has been steadily drawing millions of gaming geeks as well as aspiring newbies; although the Hall of […]

How Concierge Apps Will Change the Way Casinos Interact With Players

Since the dawn of time, mankind has been working tirelessly towards devising new things to make our lives easier. Today, we’re at a point where innovations are no longer as groundbreaking as they were a century ago. Whether we’ve adjusted our expectations, or are nearing the peak of our capabilities regarding technology, is certainly up […]