Most Popular Slots of Recent Years 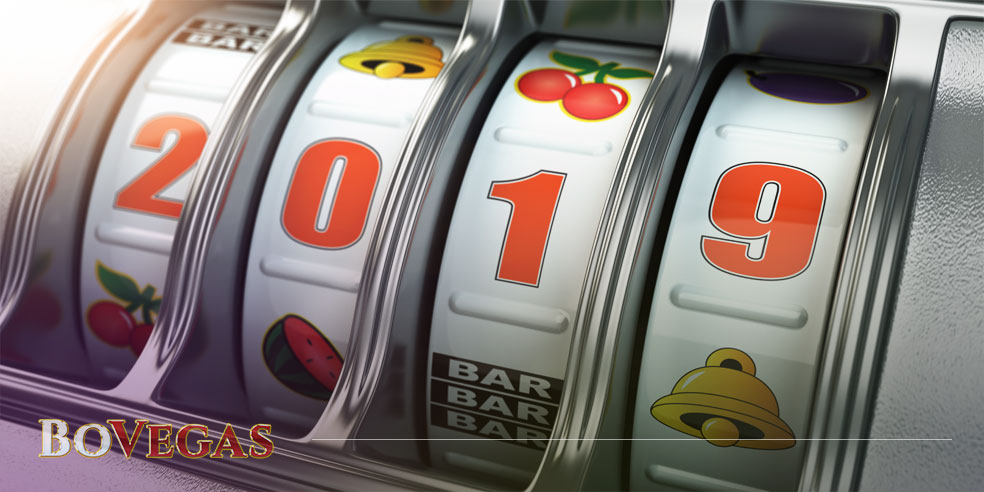 The online slot industry has always dominated the gambling niche, owing its success to the myriad high-quality games released by innovative gaming developers. But with 2018 finally behind us, we now have a rich range of slots that have all made for a pretty amazing slot-driven year. These slots have helped the image of slot game world and virtual gambling. These high-end slots have been warmly received even by gamblers who normally prefer casino table games — so lots of renowned poker fans have shared their amazing experiences of hitting these popular slot games. And we bet you can’t wait to find out what slots triumphed in the gaming charts. So, we’re now introducing you to the top 10 best slots of recent years. Brace yourself!

This 5-reel and 20-payline slot has some relatively basic graphics, but it does stand out for its epic theme and high payouts. The game features the story of Cleopatra, the legendary Egyptian queen known for her exceptional insight; but also for her cold-bloodedness as well! In this game, she features as the wild symbol; while the pyramids of ancient Egypt, stand for the scatter symbols. The Cleopatra symbol substitutes the other slot symbols, except for the scatters. Three or more pyramids trigger 15 free spins, and five wilds trigger the jackpot of 10,000 coins! 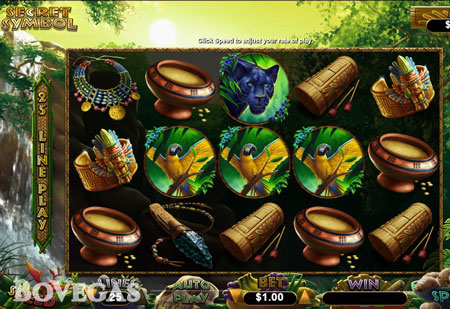 Aside from its 5 reels and 25 paylines, this slot is remarkable for its enchanting theme focused around a cruel ancient civilization. So, it features the Aztec Chief as the wild symbol, and the pyramid as the scatter symbol. The biggest payout offer of the Secret Symbol is 50,000 coins. In addition, the slot includes a free spin feature, which can actually end up doubling your winnings! In 2018, Secret Symbol attracted the attention of thousands of gamblers who were obsessed with the ancient themes at issue, as well as hungry for some real cash! 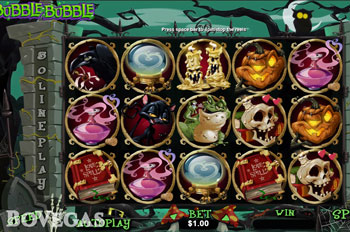 As one of the provocative slots of 2018, Bubble Bubble represents a Halloween theme which may seem trivial, but is actually pretty exciting! This game offers its players a maximum jackpot of 50,000 coins. The game has 5 reels and 50 paylines, and features the seductive Winnie the Witch as the wild symbol. Here the players can also play the scatter symbol — the cauldrons. The bet amount ranges between $0,5 and $0,25 per line. The game introduces you to the creepily tantalizing world of magic spells, disgusting spiders, and last but not least, the perfect Halloween setting. 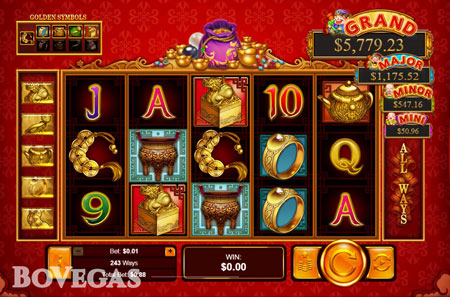 Although it’s been so little time since this slot was introduced in 2018, Plentiful Treasure has already made its way into the hearts of eager fans. With its rich oriental theme and impressive payout amount, this slot became one of the top games of 2018.

It includes 5 reels and offers an amount that’s 50,000 times as bigger as the bet placed per line. Plentiful Treasure showcases some key treasures from the world-renowned Chinese culture we all know and love so well: with all its golden teapots and other traditional elements of its national “treasury.” The slot features two wild symbols — the Pearl, the main trophy a player can get in the game, and the Bao. The scatter symbol is a pottery piece. After you get at least 3 scatters, you receive 8 free spins. 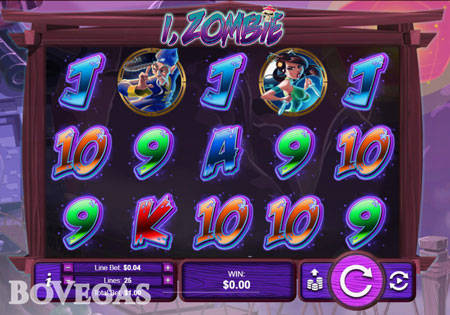 It’s easy to argue that the most beautiful and eye-catching thing about this slot is its mind-blowing graphics, featuring a perfect blend of two colors, violet and turquoise. Its amazing neon background is a great feature; but the game also manages to entice slot fans by offering them tempting payouts and a range of bonuses, as well as some special features. It comprises 25 paylines and features the I, Zombie symbol as the Wild one and a mirror as the scatter symbol. The maximum payout here is 50,000 times per bet line! 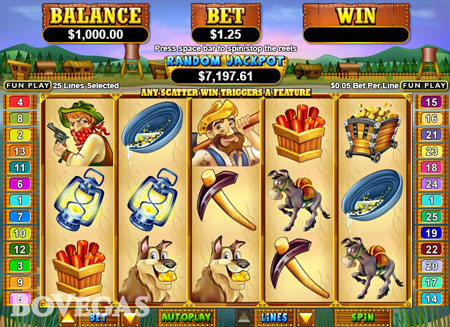 This slot features a truly spectacular golden rush theme and comprises 25 paylines and 5 reels. As the wild symbol, it offers a Gold nugget and a paydirt sign as the scatter symbol. Paydirt also has a progressive jackpot and free spins, which are triggered after at least two Wilds appear on any reel. 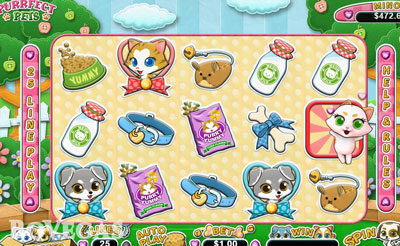 Despite released in 2017, the game gained its real popularity only in early 2018.  Based on the cute pet theme, this slot must have been designed specifically for cat and dog lovers! It features a fluffy cat as the wild symbol and an adorable dog as the scatter symbol. The biggest payout here is 30,000 coins on a single spin. The cat symbol substitutes for all other symbols except for the scatters. Three or more scatters trigger 10 free spins! 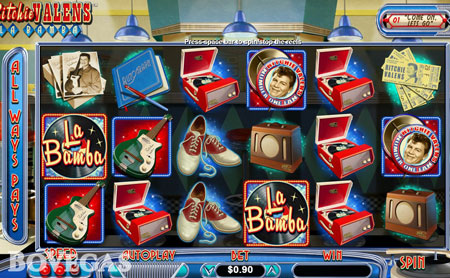 The rebellious spirit of 50s music gets exciting reenactment in this super-popular slot game. Released early last year, this 6-reel slot immediately got all the gamblers crazy about the decade’s lively sounds! The game features the image of one of the most talented American rock ‘n’ roll musicians, offering its players to plunge into an enticing vintage setting, while also having the chance to grab some really cool bonuses.

The slot presents the legendary Ritchie Valens as the wild symbol, with La Bamba Records as the scatter symbol. Gathering four scatters allows you to have 20 free spins! The slot offers the All Ways Pays bonus — Ritchie Valens gives you as many as 729 ways to win! The maximum payout here is 2,000 times bet per way. 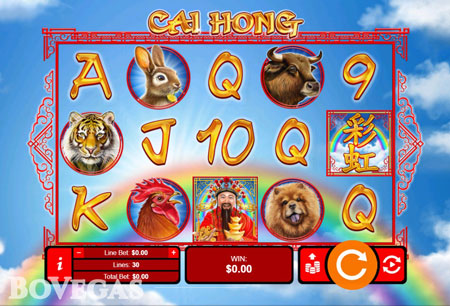 This Chinese-themed slot hit the top of the gaming charts right after appearing in online casinos in the summer of 2018. The slot has five reels and 30 paylines, and it is named after the worldwide symbol of joy and prosperity, the rainbow! In Chinese, this is what “cai hong” stands for. In this game, the bet amount ranges from $0.01 to $0.5. The slot features the God of Wealth as its wild symbol and rainbow as the scatter symbol. The biggest payout Cai Hong offers is $50,000. 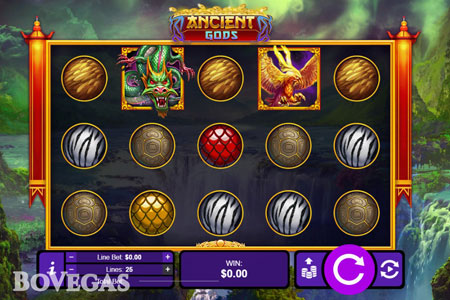 Centered around an ancient Oriental theme, this 5-reel slot introduces its players to the enigmatic world of traditional Chinese culture — Asian gods, sacred mythological creatures, and the inexhaustible riches of the masters of this celestial universe! The slot has 25 paylines and offers you a maximum payout of 7,500 times bet per line! As the wild symbol, the game features Center Dragon and Golden Medallion as the scatter symbol. Gaining at least one of these symbols will bring you 2 free spins. Released in July 2018, Ancient gods really has thrilled the hearts of any slot fans interested in Oriental themes.

As we can see now, the oriental theme enjoyed its finest hour in 2018 online slot industry. Well, people do tend to be allured by the exoticism and beauty of Chinese culture! And yet, it’s also the slots with all their other captivating themes and stories that draw gambling enthusiasts to online casino websites in their endless hunt for money and fun. So, when all is said and done, we are proud to say that recent years have seen real progress in terms of the growing popularity of online slots, as well an increasingly high number of aspiring newcomers. So, let’s hold two thumbs up to best gaming developers of the industry!

If you want to learn how to become a better player in blackjack and you’ve just started searching the web, you may be surprised to see that there are tons of learning materials and resources out there – perhaps many more than you first expected. But the sheer multitude of sources of all kinds out […]

The latest tournament for high rollers within the framework of WSOPE-2018 was hosted in Rozvadov, Czech Republic. The event, which was held in King’s Casino, has come to an end and crowned its eventual winner. It took only nine hours to determine the best poker player, who walked away with a huge prize.   Since […]

If you are looking for a great gambling experience, powered by crypto coins, you should take a look at Novacoin casinos. Novacoin gambling sites have been popping up lately, and they are getting quite a following. Their goal is to bring you the greatest gambling experience thanks to their high-end features and provably fair games. […]

Pokie machines in Australia are like talks around nuclear weapons — everybody passionately stands for getting rid of them, but nobody genuinely wants it! The gambling industry in the largest country in Oceania is flourishing at a rapid pace. And the Aussies, in turn, annually spend a big chunk of money on games of chance: […]