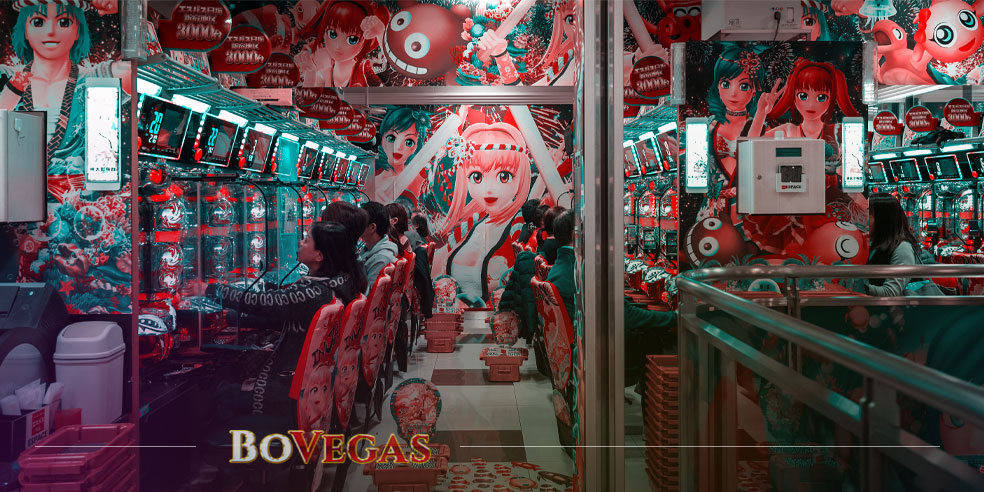 As we all know, the culture of Japan is quite distinctive and unique, and sometimes it may seem weird for Europeans, Americans, Australians, and people from various other countries. No wonder, then, that Japanese people have their own gambling machines and a one-of-a-kind gaming culture that has flourished there. It’s called pachinko, and it’s actually an arcade game featuring gameplay elements involving both skill and luck. So now we’re going to tell you the story of this game, and explain why it’s so popular in Japan!

The first-ever pachinko machines appeared in Japan sometime around the early 1920s. The early pachinko machines were 100% mechanical: they featured a vertically installed playing field, plus a mechanical system of springs and handles installed under the playfield. The machine was filled with small balls that were launched upwards, with the help of springs and handles. The playing field also featured myriads of small pins that were sticking out of the field. Those pins formed obstacles for the balls when they fell down. The player’s major task was to direct the most balls into the winning hole.

For a long time, the game of pachinko was a common Japanese adult pastime that could be frequently seen in Japanese households all across the country. And just like any other household item in Japan, pachinko also had its premium segment. The finest games were meticulously created by the most skilled mechanics, while the playing field was decorated with various Japanese traditional art samples. In the first half of the 20th century, the game became known outside Japan as Japanese billiards.

The first-ever electronic pachinko games emerged in Japan in the 1980s. As you probably know, this was the golden age of cabinet-based video games, and many of the first video poker machines and arcade-based slot machines were developed at the same time. The new pachinko machines frequently featured additional gaming options and an LED display placed in the center of the playing field. Nowadays, these displays are a standard feature of all modern pachinko machines and are mostly used for mini-games that can be very similar to the ones you can encounter in modern slots.

Little by little, pachinko machines turned into a big gambling industry. By 1994, the Japanese pachinko industry was worth around $300 billion. However, gambling was officially prohibited in Japan, so how did the players manage to withdraw their wins? Actually, pachinko machines didn’t give out any monetary wins at all. A lucky player who managed to hit the jackpot would just get a large number of metal balls. Those balls could be exchanged for some minor prizes like kid’s toys, t-shirts, gadgets, food, or any other items that a pachinko establishment owner could come up with.

For many years the actual status of pachinko machines could be reasonably described as “shady.” Many pachinko venues were owned by high-ranking members of the yakuza, and players were secretly allowed to exchange their pachinko balls for real money prizes. The war with illegal pachinkos was being held from the 1960s up to the 1990s. In the end, the Japanese government figured out that it was almost impossible to fight against the human passion for gambling, and so they established the Tokyo Union Circulation bureau, which handled issues of pachinko balls exchange on the legal level. Since 2007, Japanese pachinko machines have featured a minor jackpot.

Nowadays the pachinko industry in Japan brings in more annual income than Las Vegas, Macau, and Singapore gambling venues altogether. Japanese pachinko machine manufacturers often sign contracts with popular anime franchises, video game developers, and media holdings to expand the industry focus and to attract new players. Some of the most successful pachinko series are based on some prominent franchises such as King Kong, Aladdin, Spider-Man, Popeye, Resident Evil, Terminator, Tomb Raider, and many others.

How to Play Pachinko

Well, the first thing you need to do in order to play pachinko is to find a machine! Over 80% of all pachinko machines are located in Japan. However, you can also find some of them in popular venues in North America and Great Britain. In the rest of the world, pachinko machines are extremely rare. Still, if you have indeed managed to find one, here’s our helpful guide, which is going to help you to figure out how to play pachinko and win.

Related Posts
Underground Casinos and What They Represent
7 Best Fantasy Mobile Slots of 2018
Fascinating Stories About Scandalous Sports Bets
Gambling and Christianity: What Does the Bible Say
Tags: Casino, Gambling, Japan, Pachinko
Popular Posts
The History of a Card Deck and Its Symbolism
42981 views
The Biggest Casino Wins of All Time
36249 views
Insightful Baccarat Guide
25696 views
Roulette and Probability Theory: Math That Gets Interesting
20101 views
Top 10 Movies About Lottery Winnings
19752 views
Last Posts
Origin of Casinos and Their Development Up to Present Days
869 views
Greyhound Racing: History, Interesting Facts, Betting
722 views
How Will Casinos Look in the Future?
796 views
History of Gambling In Ireland
699 views
The Symbolism and Spirituality Behind the Card Deck Suits
809 views

Craps originated from the western European game of hazard. A great deal of gambling hype resulted when it was first introduced to the cutting-edge gaming market of the USA, and ever since then, craps has remained very popular among gamblers worldwide, helping to make gambling look as fashionable as it has always been. However, the […]

Why Casinos Prefer Cryptocurrency as a Payment Method