The Story of How Las Vegas Was Created 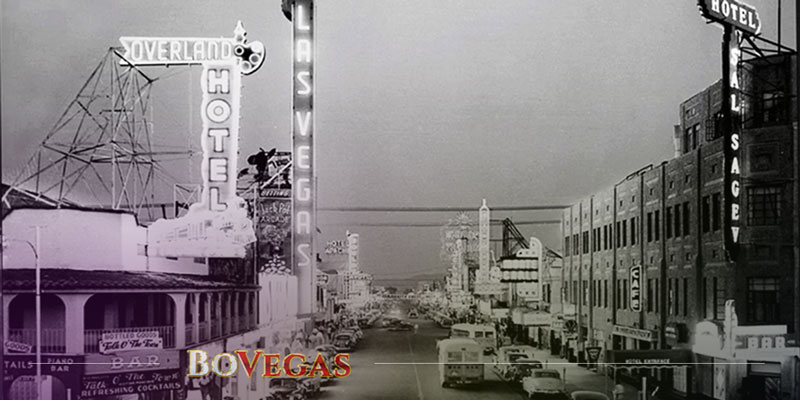 Las Vegas always fascinates us with its stories of enormous success, disastrous failures, and of course, really BIG money! There are 13 of the 20 richest and the most impressive casino buildings in the world in Sin City. It also serves “quickie” weddings and divorces. They even make shows about the implosions of past casinos. But, have you ever wanted to know the story how Las Vegas was created? Turns out that the history of this city, which has been around for a little over a century, has some mysteries and interesting facts for us to discover.

Did you know that Las Vegas almost became “the Atomic City?” Or why did it attract gangsters and Elvis Presley? And why it stands in the middle of the desert? Kick back and enjoy the story how Las Vegas was created!

Once upon a time, a Native American explorer was traveling through North America. His name was Rafael Rivera, and it was 1821. He was taking a long and exhausting journey across the lifeless desert. Tired and thirsty, he was desperately looking for shelter. Different options were racing through his mind, but the burning heat didn’t let him stop for even a few minutes. He almost ran out of water and had to take one tiny sip every few hours. Suddenly, he saw something on the horizon. At first, he couldn’t believe his eyes; he thought it was only a mirage. But as he moved on, the vision stepped closer and closer to him. Soon he realized he had found a real oasis in the middle of the sands, with springs and green trees. A little group of Indians lived there. So he called the place Las Vegas — “the meadows.”

Well, this is a really beautiful story! But unfortunately, there’s no information on what happened to Rivera next, and whether he ever came back to the oasis he found. Only 23 years later, John C. Frémont stopped at these beautiful springs on the way of his expedition west on May 13, 1844. Those were the times when this place was a part of Mexico. A few years later the US forces conquered it and assigned it to Clark County.

The official date Las Vegas was established is May 15, 1905; that’s 84 years after the visit. And that’s the year of the railroad opening, which connected Salt Lake City and Los Angeles. From then on, Vegas began to grow. First, it attracted mostly farmers. Then, for a few years, there was a massive influx of construction workers, while the Hoover Dam was being built. At the same time, gangsters from the Wild West found this place a great area for laundering dirty money, so they came in and began building casinos and entertainment venues full of showgirls and good music.

Las Vegas Development: No More or Less Than Business

Curiously, in 1909 the state of Nevada outlawed gambling in Las Vegas. Even the old traditions of the Wild West culture, such as tossing a coin to get a free drink, were forbidden. Ten years later, there also came the prohibition era, where alcohol was forbidden. Nevertheless, gangsters continued doing exactly the same things they were doing before; they were just more secretive about it! Then later on, when some Mafia families gained enough power, they made a bid to have it all legalized again in 1931.

The famous Las Vegas Strip started from the El Rancho Vegas resort built by Thomas Hull. Interestingly enough, mafia bosses weren’t building the casinos at first. This market was in fact monopolized by local families, while the mobs were responsible for certain “operations” there. However, the monopoly began to crack after building of the Flamingo casino after WWII by Bugsy Siegel, with the help of his mob boss Meyer Lansky. This casino established a trend of high-class casinos in Las Vegas. Unfortunately, Bugsy Siegel failed to prove his business plans to his fellows, and he was shot in California in 1947; after a multi-million investment that didn’t exactly seem to have the fastest ROI out there.

Aside from some rather short-sighted decisions, mafia members proved to be quite good at entrepreneurship. They created a demand without even running marketing campaigns as such. They invited the celebs of those times like Frank Sinatra and Elvis Presley to perform in private casino rooms. Naturally, the fans followed their stars across the whole country, which made for some excellent public performances too! After this, the satisfied public would have dinner at the local buffet, spend a night at the hotel, and of course, have a game or two at the casino.

But unfortunately, it wasn’t all fun and games! Many mafia bosses kept running their business the way they liked it best – by racketeering. Over the course of many decades, they managed to take most of the revenue from the casinos; until the FBI finally stopped them in the early 1980s. Some researchers also believe that when the post-war generation aged beyond a certain point, crime levels decreased significantly. Ambitious entrepreneurs took over and began doing really serious business. What’s more, Las Vegas experienced a significant rise in population throughout the late 20th century – each year it doubled or grew by no less than 60%!

In 1966, Howard Hughes was said to spend around $300 million on purchasing property in Las Vegas. Apparently, the mafia methods of doing business weren’t very helpful in the long run, so they were willing to sell any casinos that had huge debts. But Hughes knew just what to do. With his help, Las Vegas started becoming a more cosmopolitan and modern city; rather than a small town typical of the Wild West, as it was in the past.

The greatest casinos of the early Las Vegas Strip are Caesars Palace, Desert Inn, Circus Circus, Horseshoe, the Last Frontier, Riviera, Sands, Sahara, Landmark, Hacienda. They looked large and innovative when they were first built. But the era of their true greatness soon came to an end. Las Vegas kept growing, and many casinos imploded in 1990s-2000s, giving way to even more luxurious establishments. Just look at the Waldorf Astoria, Luxor, Rio, Bellagio, Trump Hotel, Paris Las Vegas, Mandalay Bay! However, rumors say that Rio (the host of the World Series Of Poker) is now bankrupt and about to be sold. Who knows, maybe it will implode soon as well?

Las Vegas ushered in a new era of its famous megaresorts at the end of the 1980s. The first of these was the Mirage hotel & casino of Steve Wynn. Later, he built one of the most expensive hotels that carried his name – the Wynn hotel. Here’s the list of the insanely posh Las Vegas resorts with casinos:

Now, Las Vegas is a huge attraction for young people as well as families, celebrities, and entrepreneurs. It’s an oasis for money-making and money-losing!

We’re guessing that back in the day when Sin City was just created, there were political reasons for expanding the territory of the US across the whole continent of North America. Later, business matters came into play. First, it was the railroad and the dam building, then Las Vegas gradually started becoming more of a tourist attraction.

Las Vegas is certainly big on gambling, even though the Las Vegas strip is actually outside the city itself. It’s also known for quick marriages and divorces!

The official date Las Vegas was established is May 15, 1905.

The craziest popularity came to Las Vegas during the megaresort era, when large hotels with casinos were built. Despite its reputation as a luxurious mecca for hotels with gold-tinted windows and penthouses for high-rollers where you can only live, if you play at least with $1 million, there are still tons of cheap offers for everyone. Perhaps the general public is what brings most of the money streaming into the city. Cheap room prices start from around $20. And for $30 bucks you can sleep in gorgeous Luxor; on top of this one, you can find the most powerful ray of light on Earth. And for $100, you can rest and play in the famous Bellagio.

Related Posts
Poker Around the World: the Best Tournaments
Online Poker VS Offline Poker
Gambling and Christianity: What Does the Bible Say
World’s smallest land-based casinos
Tags: Casino, Gambling, History, Las Vegas
Popular Posts
The History of a Card Deck and Its Symbolism
43135 views
The Biggest Casino Wins of All Time
36394 views
Insightful Baccarat Guide
25795 views
Roulette and Probability Theory: Math That Gets Interesting
20223 views
Top 10 Movies About Lottery Winnings
20101 views
Last Posts
Origin of Casinos and Their Development Up to Present Days
924 views
Greyhound Racing: History, Interesting Facts, Betting
754 views
How Will Casinos Look in the Future?
836 views
History of Gambling In Ireland
735 views
The Symbolism and Spirituality Behind the Card Deck Suits
874 views

Imagine that you are in Las Vegas, you have already hit the jackpot, and the atmosphere of permissiveness and lack of limits play havoc with your hearts so intense that the two of you decide immediately to tie the knot. And it doesn’t matter that you’ve only known each other for a couple of days […]

You can hardly ever find a person who has never dreamt of winning at an online casino. Every day thousands of people discover this exciting way to win money, read best books about gambling, and do everything they can to reveal casino tricks and to end up a winner. Of course, everyone tries to find the easiest […]

It’s widely known that Native Americans from the US have exclusive rights for opening their gambling venues on the territories belonging to their tribes. However, there are also many popular misconceptions about Indian casinos and the way they work. Many people tend to think that every adult Native American can just open a private casino […]