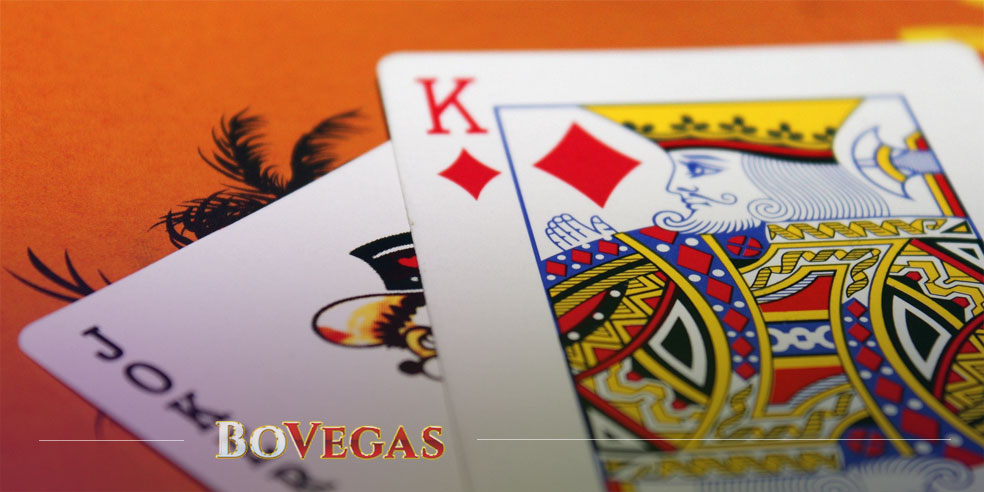 Blackjack is one of the most popular games in any casino. The rules are very easy to grasp, and the goal of a player is to form a hand without going over 21 points and to have a higher number than the dealer.

For the last decade, numerous versions of blackjack were developed to retain players and add more thrills to the game. Gamblers all around the world enjoy playing blackjack, both online and offline. Punters play for real money to try their luck in this game of chance, but there is not so much space to maneuver when dealing with its basic type. This void is constantly fulfilled by new variations to keep punters playing and to attract new players with the high chances of big money wins.

Very similar to Spanish 21, this game has become popular in Great Britain and Australia. Usually, it takes from 5 to 8 people to start it at brick-and-mortar casinos. The general rules are similar to the basic American blackjack, with some slight differences. In the beginning, each player is dealt one card to decide how much to bet on the hand. After this decision, a dealer gives the second card and the game goes in as in the standard version.

If a punter has five cards that add up to 21, then the win constitutes the double of the initial bet. When you start playing Pontoon, remember to say, “twist” instead of “hit,” as the terms are slightly different in these games.

This novice among casino games was invented in 2009 by Geoff Hall. It was designed to find favor in the eyes of dedicated gamblers, who enjoyed video poker and other electronic games. Blackjack Switch has a higher house edge than the regular version, but it has become a star product among ardor seekers. 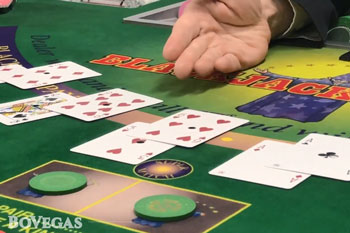 There are two initial bets in the game, as well as two separate hands. When the cards are dealt to each hand, a player can switch the top cards among them. This is where its name came from.

The cards in Switch Blackjack are dealt in the same way as in the traditional game. Once the hands are dealt, the punters first have to decide whether to switch the top cards. Then they can split, double down, hit or stand. You should become familiar with the house rules before doing a split, as casinos are rather strict on this issue.

The dealers are obliged to hit any total of 16 or less and must stand on 17 or higher. In case the dealer has 22 without an Ace, then all hands tie the dealer and get nothing from their original bet. The exception concerns only natural blackjack.

Another thing to know about this version is that it pays an equal amount of money in case of a win, thus increasing the house edge significantly. Blackjack Switch is designed for those, who choose the game over strategy, and it won’t suit pro blackjack players. 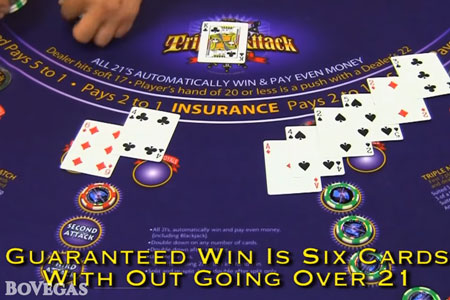 For those who decide to play blackjack for real money, this is one of the best options, as it surprisingly increases the player’s edge. Once you spot this game in a casino, don’t hesitate a bit and hit the table!

The rules of the game allow players to profit, as both of the dealer’s cards are exposed to them. To increase its odds, the house forbids using insurance and surrender. Also, you can split your cards only once, or in some casinos, you will be forbidden to do so at all. For swindlers, card counting is not an option as several decks are placed in a shoe.

Among the small details you need to remember about Double Exposure Blackjack is that the dealer has to hit a soft 17. Furthermore, when a tie happens, all bets go to the dealer. What is more, the payout is done in even odds in comparison to the 3:2 odds offered in the regular game.

Imagine that you could be paid out every time the dealer busts. Well, this is the way Buster Blackjack is played. Having the same basic rules as its original ancestor, the game contains one distinctive feature, which is a side bet.

No matter if the punter loses or wins, the side bet pays out each time the dealer busts. Despite the fact that the house edge is high, the payout for the player can go from 1:1 to 250:1 for the 8 card dealer busts. We are sure this sounds pretty enticing to you!

It’s an acknowledged fact that American blackjack takes its roots in France. Under the name of Vingt-et-un, it was played all over Europe in the 1700s. Today, it has evolved in something slightly different from its American twin.

Usually, European blackjack uses 8 card decks, which are shuffled after each round of the game. Splitting of 4s, 5s and 10s are forbidden. These measures are done to eliminate card counting.

Discrepancies between American and European types of the blackjack games also include the absence of the card peeking by the dealer. This means the dealer has no opportunity to look at the hidden card until all players act on their cards. It affects the house edge positively, as gamblers don’t know for sure if the dealer gets a blackjack; hence, it becomes a tough decision whether they should split or double down. 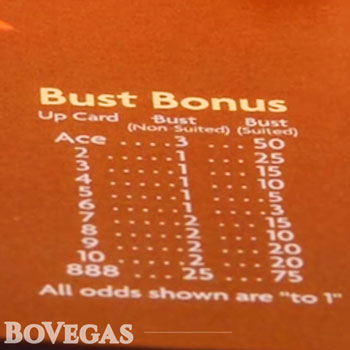 Popular with card counters and professional cardsharps, this type uses the same basic rules as the original blackjack. The most alluring thing about it is that only two decks of cards are used. And the cherry on the cake is represented by the bonus bet, which pays off each time a player gets a blackjack.

If counted right, the deck can bring you 25:1 payout in case of suited blackjack. With such a low number of decks, your edge to win skyrockets!

This isthe cash cow of many Las Vegas casinos. Because of the growing popularity of the WSOP events, there was a growing need for the tournament-like type of blackjack. This is how this game was born. Created by Russ Hamilton in 1994, it took off rapidly and continues to entertain many high rollers today.

What makes it special? To make a long story short, players compete with one another. Those players who spend all of their chips and don’t have enough to mount to the minimum required bet, or have the lowest amount of them after the elimination hand – lose. The ultimate set of the game and the rules are the same as in regular blackjack.

Created in Atlantic City, this type of game allows doubling the initial bet after seeing the dealer’s first card. There are 8 “Spanish” card decks dealt from the shoe, which means that all 10s are removed. Dealers must stand on the soft 17, thus minimizing the player’s edge. Also, players can split pairs into three or four hands (this doesn’t concern aces, as they can be split only once). What is more, a punter can double down or surrender at any point of the game.

The dealer’s card comes first and it’s exposed to the players so they can double their starting bet. The side bet before the game is also allowed so you can have a bonus win every time the dealer busts.

Once video poker became popular, there was a growing need in the variation of blackjack that could serve as its substitute. Soon enough, the multi-hand version emerged and became popular almost in every land-based casino. The number of hands you can simultaneously play depends on the available space on the table; however, in online blackjack for real money, there are no restrictions at all. If you are already familiar with traditional rules, you can easily try your chances in this game.

Except for baccarat, Chinese gamblers enjoy some of the wildest versions of blackjack. It may be found under the name of 21-point or Ban-Nag. The cards are dealt the same way as in regular blackjack; however, their values are measured in the way that all number cards get their face value and face cards get a value of 1 or 10. The amount of players is not limited, but it usually takes from 5 to 6 people to start the game.

The punter’s options in Chinese Blackjack are standard, with a slight difference in the types of winning hands. For example, a Ban-Ban gives an immediate win when you receive two aces, and the payout is 3:1. A Ban-Nag is an average blackjack that pays out 2:1. A 5-Dragon consists of 5 cards totaling 21 or less. When you get a 5-card hand, which is less than 21, or the one that is 21, then all of them are winners. In all the mentioned combinations, the win won’t count in case of a tie or a “push”.

An Escape hand is used in the game when a player gets 15. There is an option to continue the count or to fold and reclaim the initial bet. This rule also applies to the dealer.

The name “Joker” has gained popularity far beyond the scope of card games or gambling. A full-fledged symbol of pop culture, the Joker has always been associated with mystery. Nobody has seen his real face as it is hidden under a mask, but we can definitely say that his image is multifaceted. In fact, he […]

How to Control Your Emotions While Playing Card Games

By its very nature, gaming is a social phenomenon. For many of us, gaming is a great way to fight boredom and get in touch with other people; this is because of the strong emotions plus the very specific kind of tension we experience, which all makes us feel really good. Of course, different kinds […]

Imagine that you are in Las Vegas, you have already hit the jackpot, and the atmosphere of permissiveness and lack of limits play havoc with your hearts so intense that the two of you decide immediately to tie the knot. And it doesn’t matter that you’ve only known each other for a couple of days […]

The existence of addictive behaviors is still a controversial topic among many experts. While some argue that addiction is something that some people are genetically predisposed to, others don’t recognize that pathological gamblers are people with genuine behavioral addictions; they think this is simply a question of bad habits. Nevertheless, when looking at the characteristics […]