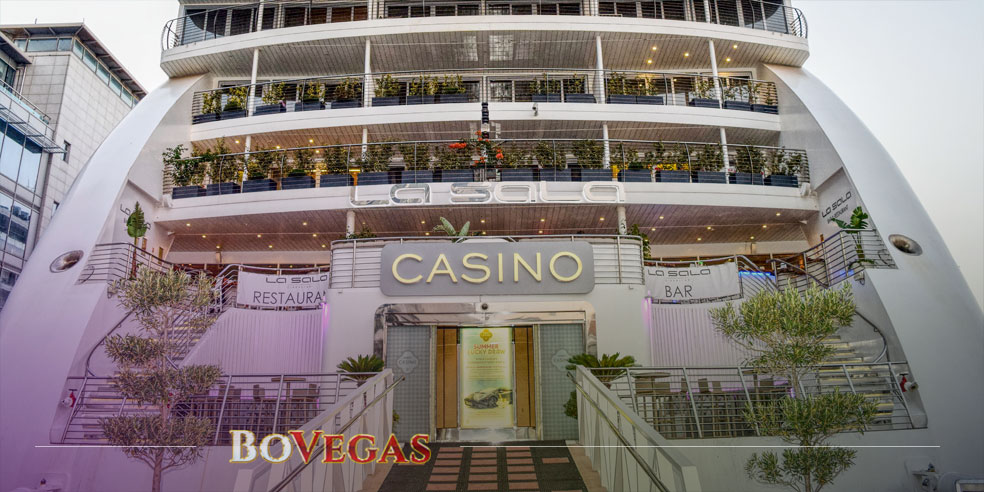 Gambling has always been under the keen attention of governments. They either wanted to impose enormous taxes or ban it completely. As a result, casinos were looking for ways to escape the restrictive local legislation. And, when there was no Internet, gamblers had to seek different ways to play. From riverboats on paddlewheels to large cruise ships in the open seas, floating casinos became really popular and of high demand. Or, did they?…

Have you ever wondered what laws apply somewhere in the middle of the ocean where the territory doesn’t belong to any of the countries? This area is governed by Maritime law, which regulates everything that happens in international waters among continents and countries. So, it’s not surprising that this law made for the creation of the first-ever ship casinos.

The most popular theory is that boat casinos became a massive phenomenon in the U.S. during the Prohibition – between 1920 and 1933. Such casinos were mostly operated by gangster families who also shipped counterfeit alcohol when it was totally banned. A ship like this could sail just a few miles away from the shore, where local legislation could not curtail all the gambling fun and alcohol consumption. Nothing could stop avid gamblers from having fun, except for empty pockets or alcohol intoxication. Unfortunately, those times are also infamous as the rise of cardsharks, who cheated in card games and robbed passengers.

At the beginning of the XX century, gambling ships raised anchors at the docks of Atlantic City, N.J. and all the way around the continent to the sunny coast of California. Needless to say, such cruises were designed for a wealthier segment of society. Eventually, this whole offshore-thing evolved into specific aesthetics, which are now portrayed in many nostalgic slots online, as well as in a few brick-and-mortar casinos.

Everything was going well. Magnates, princes, travelers and noble ladies were partying, gambling, cheating and fighting in the open waters until president Harry Truman signed a prohibition act in 1948. According to this act, gambling ships were banned from U.S. territorial waters, although luxury cruises continued to voyage in the Carribean and Mediterranean waters.

Riverboat Casinos in the U.S.

Like the open sea, the Mississippi River was considered an important transportation and commerce route since the early 1800s, when industrialization was gaining traction in America. Large paddlewheel riverboats and barges were floating across several states, taking over railroad cargo. In the meantime, riverboats were also functioning as beautiful cruise ships, slowly navigating down the still waters of the Mississippi River and offering various kinds of entertainment for their passengers. Of course, the long journey was spiced up with some entertainment. That’s how riverboat gambling became extremely popular while traveling by the Mississippi.

The initial benefit for making boat casinos was that they weren’t prohibited while sailing, regardless of the local laws applicable to land-based casinos. However, later, the situation turned upside down. After a long period of a total ban (up to the early 1990s), riverboat casinos were gradually becoming legal. But there was a twist. Authorities wanted to regulate casinos, whether on land or on water, so they passed tricky laws. These laws required riverboat casinos to operate legally only when they were moored to the banks of the territorial waters. They also had to pay hefty taxes. The first state that revamped floating casinos was Iowa, then Illinois and Louisiana.

Iowa originally set a $200 loss limit, and the boats actually had to cruise for no less than 3 hours. The same law was adopted in Missouri. Illinois then did something similar, but without strict limits. But that was only at the beginning. Later, when traditional riverboats began to lose the competition to luxury sailing casinos built specifically for gambling, the owners of simple boats made petition to the government. As a result, authorities outlawed the boat casinos from cruising down the river and expanded loss limits.

In some states, Missouri particularly, operators started building man-made ponds where they moored large, building-like vessels that didn’t have the slightest resemblance to boats. Those operators were enjoying the benefits of a new law regarding moored riverboat casinos while spending much smaller budgets. In the meantime, locals were upset by the growth of these businesses because “boats in moats,” as they called them, were tied to the land by plumbing lines and power cables, while the shores were drowning in the litter. The complaints led to the banning of “boats in moats.” Strangely enough, the existing ones were sanctioned.

Both riverboat casinos and gambling ships beckon with their unparalleled elegance. And it’s really hard to resist having fun like aristocracy at least once. But are there any boat casinos near you? We don’t know for sure, but we can provide a list of the best boat casinos operating in the U.S. You can bookmark this page and make a little gambler’s tour checklist for getting more of those winning thrills! 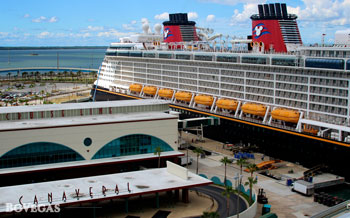 This casino cruises 7 days a week and twice a day, so tourists have lots of chances to enjoy their time on this graceful ship. Indoors you’ll find more than 600 slot machines, like in old times, but much better because they are equipped with touch screens and hundreds of interactive games to choose from! The continuous fun brought by dancers and live bands creates an unforgettable atmosphere of a Vegas-like experience. Iconic casino games played on heavy wooden tables include Texas Hold’em, blackjack, craps, roulette, and more. 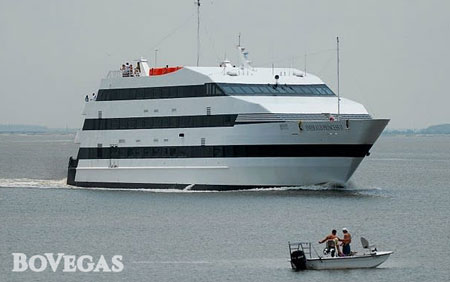 Brunswick, Georgia is a gambler’s must-visit place, especially if you are planning to visit Savannah’s tourist attractions located nearby. Only an hour drive away and you are in Brunswick, where you can have fun on a real boat casino.

Emerald Princess II Casino is located on the edge of Jekyll Island State Park, a great place for outdoor activities, and there are also a few nice hotels nearby. Yet, speaking of this boat casino, you may not want to go home once you get there since it includes four decks of unstoppable fun. Two floors of games are more than enough for gamblers who can choose from among 16 blackjack tables, two roulette tables, two dice tables, six Texas Hold’Em tables and two tables for Stud poker! Slot fans can play the night away, choosing from 220 new and shining slot machines. Meanwhile, Double Down Lodge welcomes everyone to  Bingo nights.

On special occasions, the casino offers themed parties with special tournaments and awesome prizes. Food and drinks are available at a bistro and full bar onboard. Live music plays Fridays through Sundays. 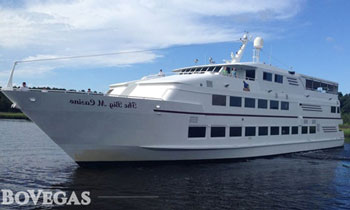 Myrtle Beach offers so many attractions, it is challenging to visit them all during one visit. Yet, what can be better than just chilling and playing casino games on a snow-white yacht after sunbathing and other outdoor activities! The Big M Casino has two ships cruising, days and evenings. Dates and times might change, so it’s best to plan your trip in advance.

The fanciest two casino ships in South Carolina offer a Las Vegas kind of fun with craps, roulette, Let-It-Ride, 3 card poker and blackjack. And the newest slot machines are said to bring considerable winnings to many players. Other machines are available specifically for playing video poker and “Pot O’ Gold.”

The buffets on both ships offer all-you-can-eat options as well as food-theme nights. For example, on Wednesday, you can come to Prime Rib Night, and on Friday, you can relax listening to live music while savoring exclusive seafood meals prepared by the chef.

Related Posts
Top 10 Books Set in Las Vegas
Casino Players’ Favorite Bonuses
What Are the Basic Rules of Online Poker?
How to Cash Out in Online Casinos
Tags: Boat Casinos, Casino, Gambling, History
Popular Posts
The History of a Card Deck and Its Symbolism
41069 views
The Biggest Casino Wins of All Time
33132 views
Insightful Baccarat Guide
24568 views
Roulette and Probability Theory: Math That Gets Interesting
18172 views
Top 10 Movies About Lottery Winnings
17250 views
Last Posts
Origin of Casinos and Their Development Up to Present Days
454 views
Greyhound Racing: History, Interesting Facts, Betting
358 views
How Will Casinos Look in the Future?
381 views
History of Gambling In Ireland
337 views
The Symbolism and Spirituality Behind the Card Deck Suits
387 views

How to Get the Best Out of Your Big Pairs

We all know this great feeling that you get when you peek at your hole cards and find you’re holding a big pair, like two Aces, or two Kings. Of course, there’s also nothing worse than watching your big pair go down in flames to a hand like the Jack-Nine of Spades. That’s why this […]