Phil Ivey: The Secret of Success 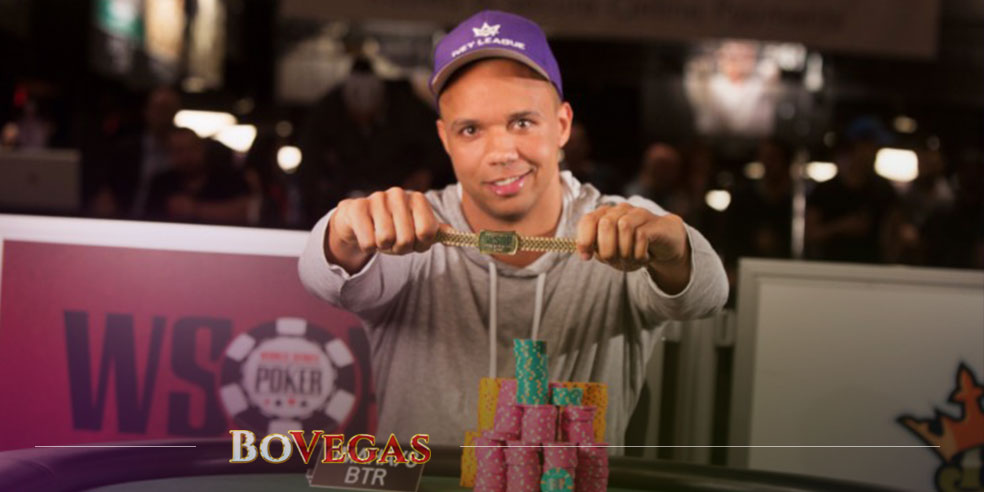 There are many household names out there in the galaxy of poker stars, but one of them certainly stands out from the crowd. There is no professional poker player or layman who doesn’t know Phil Ivey. This owner of ten WSOP bracelets has become the face of professional poker over the last decade. His playing style and natural wit make him one of the most recognizable punters in the world. So if you’ve never heard of him, it’s time for you to read more about this card game maverick!

Phil Ivey Jr. was born on February 1st, 1976 in Riverside, California. However, he spent most of his childhood in Roselle, New Jersey. Phil was introduced to the game at a young age. His grandpa taught him how to play poker at the age of 8. Surprisingly, the young punter grasped the rules very fast, and was even able to come up with his own winning strategies. This was the moment when his grandpa first recognized the talent that was brewing in this future poker star.

As Phil was growing up, he regularly participated in weekly poker games at his friend’s house, but the stakes were so low that he couldn’t win enough money to satisfy his needs. So as a teenager, he would use a fake ID to sneak into Atlantic City casinos to play for real money, where he would spend whole evenings playing and never leaving the table. And that’s why the nickname of “No Home Jerome” stuck with him for a while! By the way, he was called Jerome because it was the fake name he used in his ID.

Until he entered the poker circuit at the age of 21, he couldn’t satisfy his ambitions and was constantly practicing at the Atlantic City casinos. He even moved to the city to be closer to what has become his professional passion.

As he turned 21, he stopped using his fake name and entered the big stage under his real one. He made his first steps into the world of live tournaments at Trop’s Customer Appreciation Invitation Tournament in Atlantic City. He easily won $1,000 and finally started his new life as a real high roller.

His still lasting romance with WSOP events started back in 2000, when he won his first bracelet in the Pot Limit Omaha event. He cashed out $195,000, making it to the two final tables. This novice player had to play against such titans as Amarillo Slim and Phil Hellmuth.

His biggest winning streak happened in 2002 when he took three golden bracelets at the World Series of Poker. The only poker pros to hit the same streak were Phil Hellmuth and Ted Forest. Phil Ivey scored in Stud Hi/Lo, Seven-Card Stud, and SHOE. The last one showed the extraordinary ability to master any variation of the game from Texas Hold’em to Draw Poker. His WSOP list is rather long, and so it would be pretty hard to analyze all of the wins in detail. However, they can be arranged in a table, like so:

His winning record with the World Poker Tour is a little bit less impressive. He tried 12 times to win the tournament, but made it to the final table only 9 times. He broke the WPT losing streak in 2008 by winning the first prize and scooping $1,596,100. 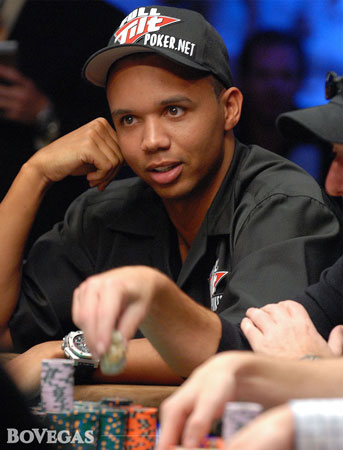 Phil Ivey took on the challenge of some other major poker events as well. He got to the final table at the London All Star Challenge at the European Poker Masters in 2006. He cashed out only $12,534. But the year before this, he got $1,000,000 at the Monte Carlo Millions event. His lucky poker hands helped him snag an additional $600,000 at the FullTiltPoker.Net the following day.

As every famous high roller, he just had to participate in some TV programs that were dedicated to poker. In 2007 he appeared on NBC’s Poker After Dark, successfully winning the $120,000 prize. In addition to that, he participated in the “National Heads-Up Poker Championship” on NBC the same year, but was defeated by Don Cheadle. He also went on GSN’s High Stakes Poker, where he appeared in seasons three and six.

When it comes to cash games, he is known to be one of the frequent guests of the Bellagio in Las Vegas. Usually, he wins the pot in the $4,000-$8,000 mixed cash game. One of the most intriguing things of all happened in 2006, when Phil Ivey decided to join the group of poker pros, called “Corporation.” The group aimed to beat billionaire Andy Beal in the game. The tycoon started $10 million over the “Corporation,” but when Phil played Texas Hold’em with him three days in a row, Beal walked out $16 million lower from the starting sum.

No wonder this poker icon was named “Poker Player of the Year” by All In Magazine in 2005 and 2009. He also got his own poker room in the ARIA Casino called “The Ivey Room.” He is one of the most acclaimed poker players in the world.

The last big tournament entered by Phil Ivey was the WSOP 2019, where he entered the $50,000 buy-in Poker Players Championship event. Early in the tournament, he didn’t seem to really get into the game. He appeared in a three-way pot situation of stud eight-or-better with 11 players remaining. Even though his pair of jacks and 7-4-3-2-A low didn’t seem that good, he could have won at least half of the pot; but he decided to fold. However, this is not the first time he did that. Back in the 2009 WSOP tournament, he accidentally folded the winning straight flush!

Phil Ivey’s talent also revealed itself in online poker. He had been considered the biggest cash winning player before 2011. Playing with Full Tilt Poker, he managed to earn over $19 million throughout 2007 and 2011. He still plays online poker on Full Tilt Poker under the nickname Polarizing, as well as a RaiseOnce on Pokerstars.

The first major scandal involving Phil Ivey happened in 2011: just after Black Friday, he filed a lawsuit against Full Tilt Poker. He sued them for breach of the contract. He wanted to get around $150,000,000 compensation for the damage, but he settled the lawsuit instead.

Yet another huge scandal burst out when Phil Ivey played Punto Banco in Crockfords Casino in London, where he successfully bagged $12 million. The casino accused him and his partner Cheung Yin of edge sorting. During the case trial, Phil Ivey confessed that he made the dealers rotate the cards 180 degrees for him, so he could get a chance to make a mental note of the asymmetrical patterns on the cards. This was recognized as cheating both in the first instance and in the court of appeal.

After that, the Borgata Casino from Atlantic City filed a $10 million lawsuit against Phil Ivey and won. The federal judge gave permission to arrest Ivey and pursue him for his assets in Nevada in 2019, in order to recoup the entire sum. 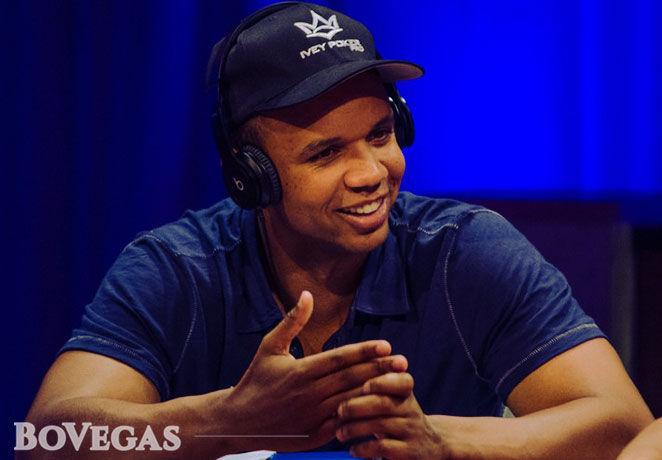 Phil Ivey had been married for seven years before he divorced his wife Luciaetta in 2009. Nowadays, Phil Ivey’s net worth is about $125,000,000. He constantly participates in charity events like Empowered 2 Excel for underprivileged children. Moreover, he’s continuing his grandfather’s initiatives under the Budding Ivey Foundation, in order to fight children’s illiteracy and help homeless people.

Phil Ivey enjoys prop betting, video games, golf, and watching sports (he’s a huge Los Angeles Lakers fan!) The amazing thing about Phil Ivey is that he has his own support group: the elderly couple Pat and Mel Humphries. They have been supporting Phil for a long time now, starting from his early days on the professional poker stage to the recent years. They always try to attend each event, and support him in every possible way.

In order to share his skills with anyone who’s interested, Phil has launched his own website called Ivey League. Here, everyone can learn about the latest poker strategies out there by subscribing to the various different plans he has on offer.

What do you know about this outstanding poker maverick? Here are some of the most asked questions online, along with some useful answers!

Phil Ivey is a professional poker player and the owner of 10 WSOP bracelets. His net worth is over 100 million.

Phil Ivey is reported to have a net worth of more than $100 million. He holds leading positions in the list of the biggest poker winners, having won over $20 million in cash.

Erik Seidel is considered to be one of the richest poker players in the world, with his $40 million fortune. He is followed by Antonio Esfandiari, who has managed to bag $23 million in tournament cash. Phil Ivey is in the middle of the top 10 list, with his massive fortune of nearly $20 million.

If you thought that betting is closely related to sports and casino games only, you couldn’t be more wrong! People bet on the most bizarre things, such as predicting the date of death of celebrities or anything that has to do with royal weddings. I’ve even encountered people betting on which city Amazon will choose […]

Ethereum Gambling Is On a Roll

Blockchain gambling is becoming extremely popular nowadays, and Ethereum (ETH) casinos are picking up steam. And it does appear that by this point, some cryptocurrencies are no longer able to keep up with the pace and satisfy their users. This tendency started with Bitcoin (BTC). There were actually many Bitcoin Dice and other gambling apps, […]