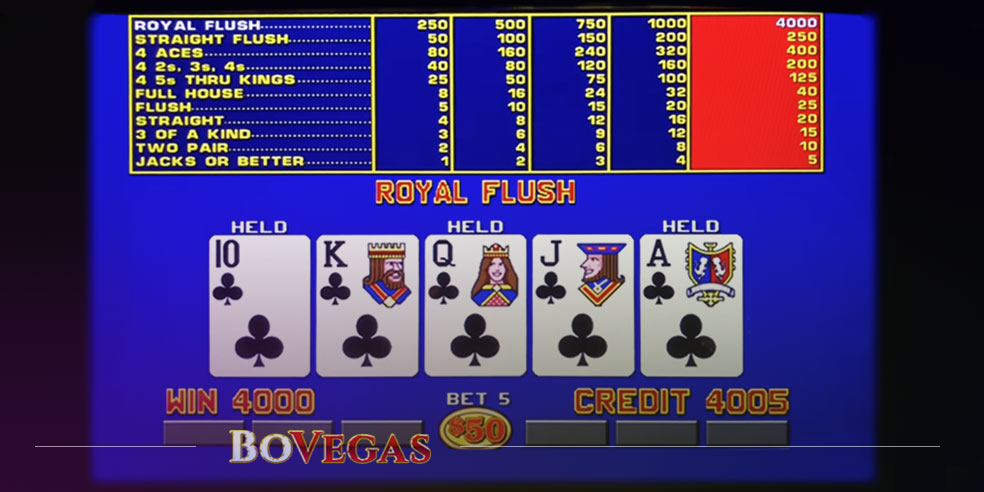 Every poker player dreams about getting a Royal Flush. Whatever kind of poker game you might be playing, either online or at a land-based venue, against other players or against a video poker machine – royal flush is something like the holy grail of that game. It’s a pretty obvious sign that you’re a lucky devil and have all the chances in the world of taking the house.

But royal flush is a rare bird. What are the odds that you might see this fantastic hand being dealt to you? Well to start with, let’s examine it in the context of video poker. 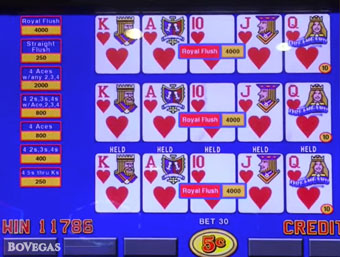 We’ll stay on with a Jack or Better example as it is still the most popular version of video poker games. Just to remind you, ten and lower are considered low cards, jack and higher – high cards, and the deck is a standard 52-card one. The machine “shuffles” the deck and deals five fully random cards out of 52 set. This is the initial hand the player considers what to do with: which cards to hold, and which to discard.

Technically, this is done by hitting “hold” button on the cards to keep and then hitting the “draw” button to play on. Once it is done, the machine shuffles the remaining 47 cards to replace the ones that the player has opted to discard. And now the hand is complete. The cards in which the player decides to get rid of play no further part in re-shuffling; but after the complete hand is played, all 52 cards are reshuffled again for the next hand to play!

What Are the Chances?

The chances of landing royal flush, five cards, A-K-Q-J-10, one suit, on the initial deal might be charitably described as very low. The math says 0.00015%. In other words, your odds are 1 to 649,740. But that is for the initial deal, which is called natural royal flush!

Having got your five initial cards, you could discard all of them hoping for the new draw. And if there was no natural royal flush, then your chances of landing it with the new five cards are a bit higher – 1 to 383,484. However, it is still pretty close to absolute zero!

Now imagine you have got four cards to the royal flush – say, A-K-Q-J of the same suit, plus one worthless card you would obviously like to replace. What is your chance of getting what you need – 10 of the suit, in this particular case? Well, let’s begin with the probability of getting four cards to the royal flush. This set is also very rare: 1 in 2,777. But even if you get it, you’re still pretty far away from your dream: in fact, the chance of you hitting the missing card is 1 to 47!

Three cards to the royal flush is a much more common occurrence. You are dealt this set once in every 92 hands. Video poker is a fast game, and even if you play casually, at your leisure, you are going to play these 92 hands in about two hours or so. Of course, this is only on average. You could play 4-6 hours with no “three cards to the royal flush” hands ever seen; or you could get it several times within an hour. But statistics-wise, you hit this three-card set every 92 hands dealt to you.

“Every 92 hands” sounds just great, but don’t kid yourself – if you press “hold” on these three cards and draw the missing ones, your cheeks blushing with excitement, your chances of getting exactly the two missing cards are disappointingly low – just 1 to 1,081!

What about two cards to the royal flush? If you play video poker regularly, you must have seen this combination of cards many times. In fact, it folds 40-50 times per hour. But the odds to draw three missing cards are very long: 1 to 16,215.

And finally, about one card. You get at least one high card very often – about 100 times per hour. If you are a real royal flush hunter, then you can opt for holding this one card and discarding the other four – hoping to land four cards you need. But the chances are very low: only 178,365!

Is it Worth Hunting for Royal Flush on Video Poker?

The answer to this question depends on what kind of person you are. If you’re kind of a big game hunter, then target royal flush while considering which cards to hold and to replace. But just remember that the math is not going to be on your side all the time…

For example, if you are dealt Q-J-10 of clubs and a queen of diamonds, there is a tough choice: whether to hold Q-J-10 to draw royal flush, or to hold two queens. The calculations of expected return (ER) have been done for such cases. For drawing royal flush ER is 7.4098, for holding the pair of queens ER is 7.6827. So, math-wise, the pair of queens is a better strategy for playing this hand.

Aggregating all the odds and chances of hitting natural royal flush as well as other options (to draw one, two, etc. cards needed to complete this hand) – you need to play about 40,000 hands to hit royal flush in video poker! But this is only on average. Your chances for royal flush are 63.2% if you play 40,000 hands and 86,5% if you play 80,000 hands. But it is all about being lucky, or not lucky – you could play 100,000 hands and still miss this hand of your dream! Or you could land it several times – depending, of course, on your luck and skills…

You could win a lot with royal flush. Actually, that’s why it’s better to always play on max bets – 5 coins. I.e., because there’s a top payout at royal flush with this bet: the jackpot of 4,000. If you bet 4 coins and hit royal flush, you will get only 1,000. Even though royal flush is very rare, you will never regret having bet 5 coins when you eventually land it!

This game is supposed to be fully random, ruled by the math of probability. Which means that yes, your odds for landing royal flush are still the same wherever you play this game!

There are many different kinds and versions of video poker out there. While Jacks or Better is the most popular one, Deuces Wild is the game with the best odds – provided the player uses the best strategy, of course! Playing Deuces Wild you could even get a small advantage over the house, by making your return slightly higher than 100% – in fact, 100.7%. But you should really learn how to do it. It takes time, patience and practice!

Deciding on the gambling bets for various casino games is of great importance. Some would say there’s nothing complicated, just choose the coin value and then make a bet! However, there are several points where casino visitors can either decide to curb their appetites or just let them loose. Each individual player has their own […]