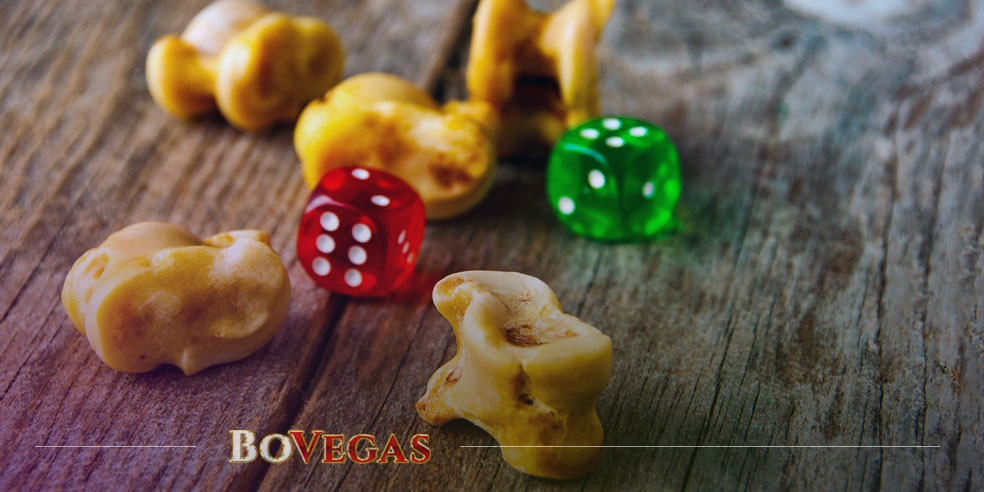 In this article, we’re going to tell you about the ancient game that is itself the origin of many modern games like the children’s game Jacks and casino Craps. Knucklebones is thought to be the first form of dice, although it’s still used for fortune telling and some primitive kinds of gambling. Being originally a kid’s game, it plays an important cultural role, is represented in much of the world’s folklore traditions, and has survived thousands of years in nomadic animal husbandry societies.

In Central Asia, this is still a popular game; in Mongolia, it is called Shagai, in Kyrgyzstan Chuko, in Kazakhstan Asyk, in Turkey Ashyk, in Tajikistan Oshuk, in Russian Babki; while in English it may be referred to as ankle bones, and playing them is called ankle bone shooting. Among the nomadic nations of Central Asia, the astragalus of the ankle of a goat or a sheep is used for traditional games and fortune telling. This is believed to be the origin of dice and craps.

In the most widespread variation of this dice game, the rolled shagai may land on one of five sides: goat, cow (very improbable), sheep, horse, or camel. The shagai may be painted in bright colors.

They are also used in fortune telling: four bones are rolled on the ground, and the two convex sides, i.e. sheep and horse, are believed to be lucky; but the horse is the luckiest one of all! But the concave sides, camel and goat, are considered unlucky. And if you roll all four sides in one throw, you have very good luck indeed!

Many traditional Mongolian games can be played with shagai pieces. It depends on the game; the knucklebones may be tossed like dices, shot at with arrows, flicked like marbles, or collected. In some games, the side on which a tossed bone lands is also significant.

The most common are:

Knucklebones in Ancient Greece and Rome

Knucklebones are believed to have been invented by the Lydians, as referred to by Herodotus, during a period of famine during the reign of King Atys; while Plato attributes their invention to the Egyptian god, Thoth. Sophocles believed the game was invented by Palamedes, who taught it to the Greeks during the Trojan war.

The most common game that comes from knucklebones is something we all know and probably played as kids: jacks!

The derivatives of ancient Knucklebones are played worldwide. In this table, you can see the countries that play the game and what it is called there.

Some other countries where it’s played include Malaysia, India, Singapore, Morocco, Madagascar, Australia, Macedonia and throughout Africa.

You need a set of five jacks, or knucklebones, to play the game. The game has a lot of steps that get harder over time. You need to start with “Plains.” But before this, you need to Jockey. Hold all the jacks in your hand, throw them up, turn your hand over quickly and catch as many as possible on the backside of your hand. Then throw them up again from the back of your hand, turn your hand over and catch as many as possible in your palm. Choose one of the jacks in your hand to be your taw. In step one, throw up your taw, quickly pick up one jack from the ground, and catch your taw again with the same hand. In step two, pick up two jacks. In step three, pick up three jacks, then one. In step four, pick up all four jacks together. Many other variants of this game are possible.

The origins of the game are unknown, but in ancient times the Greeks, Romans, and Egyptians already played it. We can find statues and paintings featuring ancient characters and gods playing knucklebones.

Knucklebones in ancient Greece were played in two manners. The first method was very similar to the one commonly encountered today; i.e., tossing the bones up and then catching them on the back of your hand. By contrast, the second form of the game was a game of chance, where people threw the bones on the table and then counted the sides that were facing up. The payers used four astragali, and the highest score in the game was 40.

The rules of Jacks are similar to the rules of Knucklebones; the game can either be played outdoors on concrete or indoors. You need just a set of up to 10 jacks and a small bouncy ball. The jacks are six-pronged metal or plastic pieces. You throw the jacks in order to try and scatter them evenly, and then throw the ball up, let it bounce, and meanwhile pick the jacks and the landing ball.

Jacks or Knucklebones is an ancient game, dating back to prehistoric times. The first jacks were made of natural materials – animal bones, shells, stones, and seeds. Sheep knucklebones were originally the most common type of jacks.a

Slots Tips: Dos and Dont’s You Must Know

Slot machines have always been pretty popular, but their audience has skyrocketed over the past few decades. Nowadays, slot games represent the biggest segment of the world’s gaming industry in terms of their turnover, number of players, number of games offered and even in terms of casino revenue per square foot. But if online casinos […]

Many players who want to immerse themselves in the world of online gambling are afraid to deposit money into their accounts at online casinos. New players often wonder what options are available to them, whether it is safe to share their financial details with online casinos, and whether they need to be careful when making […]