The Ultimate Guide to Sic Bo 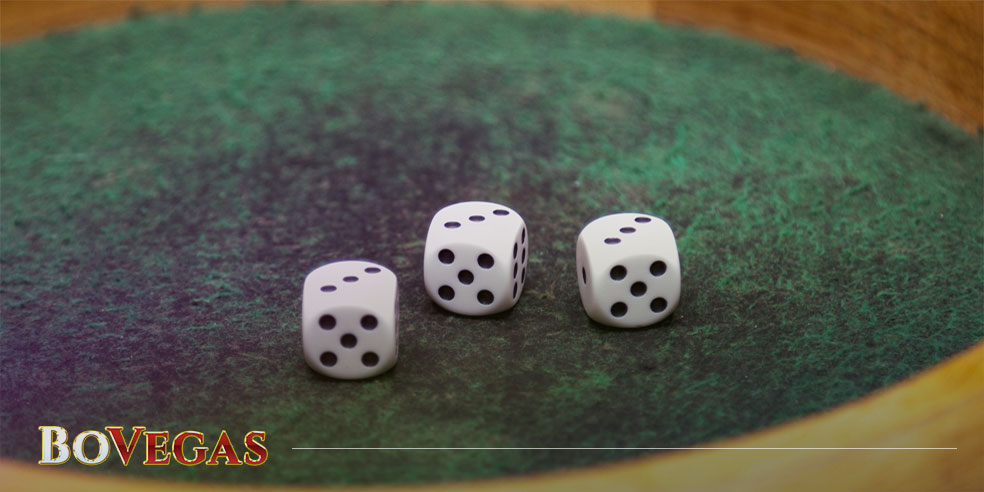 Sic Bo is an ancient gambling game which is now popular in both Western and Eastern casinos. This is a dice game like craps; but it differs from the latter, insofar as it is purely dependent on chance, and does not require any real strategy. The object is to guess the result of the three dice. The number of betting options is impressive: the probability ranges from 0.46% to 48.61%. After the players have placed their bets, a dealer shakes the dice and then reveals the combination.

The Game’s Transition From the East 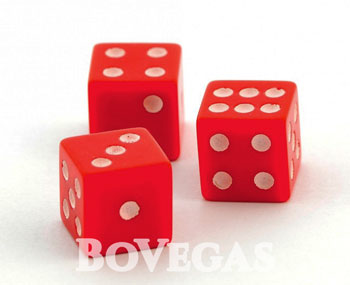 This game has originated in China, where it’s known under the names ‘Dai Siu’ meaning ‘lucky dice’ and ‘Tai Sai’ meaning ‘big small.’ It’s hard to track its history, but Sic Bo is probably thousands of years old, as dice were used for games before the invention of paper and the emergence of cards. The entertainment was brought to the West by immigrants working on the American railroads in the 19th century, and it only became known to the majority of gamblers in the middle of 20th century.

At some stage, it was modified to ‘Chuck-a-Luck’ in the U.S. (the dice are rolled in a glass container) and ‘Grand Hazard’ in the UK (as a version of old army pastime). These variations have not become very popular. Nowadays, Sic Bo is established in many casinos all around the world, being extremely demanded in Macau. Las Vegas has experienced the biggest ‘Sic Bo boom’ in the 1990s.

Participants may bet on the total amount, one number (out of three), or a certain combination (of two, three or four numbers). Players can make as many wagers as they like. Let’s look at different types of bets available while playing Sic Bo:

There’s a condition about triple winnings you have to be aware of: small/big wins will be dismissed when any triple appears!

As the game is insanely popular in Asia, land-based and online casinos over there have a comparably more significant house edge. For instance, the advantage casinos in Macau offer for specific triples stake reaches 30.1%, while in the UK it’s 16.2%. Gambling venues in Macau often provide a slightly different game called Yee Hah Hi, where symbols pictured in three colors are used instead of numbers.

Live dealer Sic Bo is a trending version of the game which delivers a life-like experience in a digitized form. It’s usually has a distinctive oriental vibe, with Asian girls being the croupiers who roll the dice. 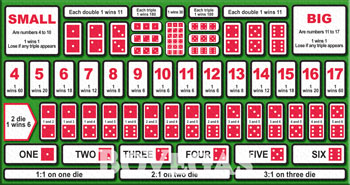 Sic Bo is a game of chance that doesn’t require any skills, but it still does not make you wager without thinking about it. It’s advisable to stick to defensive (low-risk) strategy here: focus on small/big and combination bets. To balance the risk, you can combine conflicting stakes to make sure that one of them will win. It could be, for example, a triple 4-4-4, a single 1, and a four-number combination 2-3-5-6.

There are some strategies which apply to many gambling activities. The Martingale system, which recommends doubling a wager after losing, is also commonly used in Sic Bo. There’s also the reverse Martingale system that represents an opposite approach. They might bring you small profits, but only in combination with luck.

Calculations are essential not only for players but for providers too. There were some incidents of players finding a flaw in casinos’ systems which formed a customer edge: in 1994, a player published a scheme of beating the game and receiving $450 per 72 rounds. With the rise of online casinos, it’s easier for operators to avoid such mistakes, as the RNG ensures the results.

The key to this casino game is understanding the payout percentage and the system of bets. Find out what your chances of winning are for every particular bet. The Sic Bo table may seem confusing to a newcomer, but once you have gained some experience, you’ll get used to wagers and realize what types are more common and which ones can be the most profitable.

Many gamblers wonder whether it is possible to outsmart the technology behind online slots and ask themselves how to beat slots at the casino. Some are looking for magic tricks that would quickly bring big wins while others focus on calculations and deciphering the patterns of how slot machines work. At first glance, all of this […]

What online slot players care about most is the money they get at the end of it all. Even if the playing itself, and the adrenaline boost that comes with it, is also a good reason to start hitting the slots… There’s one very good reason why players can’t get enough of the slot machines […]

Train Your Brain to Become a Great Gambler

While most gambling websites post thousands of different blog posts about gambling strategies, various tips and tricks that can help you become a better gambler, they often forget the essential component of success! This single greatest tool is located right between your ears – yes, you’ve got it right, that’s your brain. Surprisingly, your mind […]