HOME / Casino Tips and Tricks / Is Poker Bot Capable of a Reasonable Bluff?

The main problem with artificial intelligence is not about winning at chess, the game of Go, or solving the Rubik’s cube. Indeed, while all these games have a vast number of plays, they still are very transparent in terms of options. When it comes to playing poker, everything changes dramatically fast and it is most clearly seen when trying to program a ‘thinking’ bot.

So, what is a poker bot? A poker bot is a program designed to play poker against humans and other programs. The invention of such a bot would seemingly change the very essence of online poker and turn the world of online poker into a battlefield between humans and bots. However, it’s not all that simple. The main problem is turning meaningful data into effective and useful game strategy. Generally speaking, finding and picking up a particular set of rules for a poker bot may help it achieve the optimal result in the game. 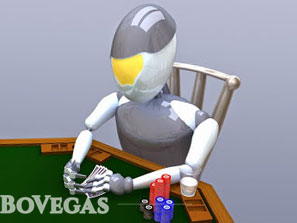 When it comes to a game like poker, a game with incomplete information, things are a little different. A bot will not be able to win merely by following a limited set of rules because some data is missing; that is, a player does not know the hands of other players. This conclusion applies to many other areas, such as gambling on the stock exchange, purchasing at auctions and participating in business negotiations.

For instance, you can still find the optimal set of rules for a game like Go, which is open, but has many more possible steps than chess. AlphaGo, a software program developed by Google’s DeepMind’s, confirmed this fact. On the other hand, if you want to win games with incomplete information, you need to continually adjust your game strategy according to the data based on the play of your opponents. Playing your hand the same way will make you as predictable as a bot, and you will most likely lose.

Poker has long attracted such famous scientists as Alan Turing and John von Neumann, who were among the first to become interested in thinking machines. And now this interest is constantly increasing.

Often poker is considered to be an art, rather than a science, because it depends heavily on ingenuity and initiative and not on monotonous figures and calculations. Nevertheless, the best poker bots today make us doubt this idea. At the same time, our understanding of how a bot and a human create a game strategy and make decisions also changes.

In 2015, there was a very significant event in the world of poker. Developers from the University of Alberta presented their poker bot, Cepheus, which was able to solve the limit version of Texas Hold’em for two players, which is a one-on-one game with restrictions on maximum betting. The bot played according to the equilibrium strategy, which in every single situation depends on possible options with a certain probability. So, the player adhering to such an approach will not lose money in the long term.

It is noteworthy that no one taught Cepheus any poker strategy. He learned from losing billions of simulated hands.

Can Success Be Achieved in Other Poker Types?

To date, developers have switched their attention to other types of poker. The limit version of Hold’em, solved by Cepheus, has a somewhat rigid framework, which makes it possible to study the strategy more efficiently. However, it significantly reduces the relevance of such studies regarding their use in the real world.

Undoubtedly, no-limit Hold’em will be the next step in the poker player vs. bot challenge, as this game is by far the most popular poker version. The fact that the bet amount in this game is not limited, and the player can go all-in at any time, significantly complicates the task.

Some bots already play no-limit Hold’em with ease and even show some tactical thinking that is far beyond human capacity. Gradually evolving, bots are beginning to discover new ways of juggling risks and also finding innovative decision-making options for playing games with incomplete information.

All of the above begs the following question: Which aspects of our behavior can be considered inherently human and which can be adopted by thinking machines?

Although poker is a psychological game, one cannot say that in this game only people can deceive each other; that is, to bluff. In fact, as of today, the poker bot can come to the same decision based on the optimal strategy.

The best poker bots have taught each other to bluff, to show aggression and even to manipulate their opponents. In the end, we can say that Kasparov’s expectations that computers will understand that it is sometimes profitable to play like a human, and not like a machine, are gradually coming true.

The Dopamine We Get from Playing Slots

What do free online slots have in common with caffeine-free coffee and non-alcoholic beer? Well, all these things are mere simulations that make you feel whatever you want to feel, but without any harmful consequences. So what’s so interesting about free slots? We all know that video games might be pretty exciting, especially ones with […]

Humanity has seen a lot of trends that are changing in the blink of an eye. The weather, political situation, hunger, economic situation, and many other topics all have become important points of discussion. And recently, cryptocurrency has become one such topic. To be precise, people are talking about the ways of investing in cryptocurrencies. […]