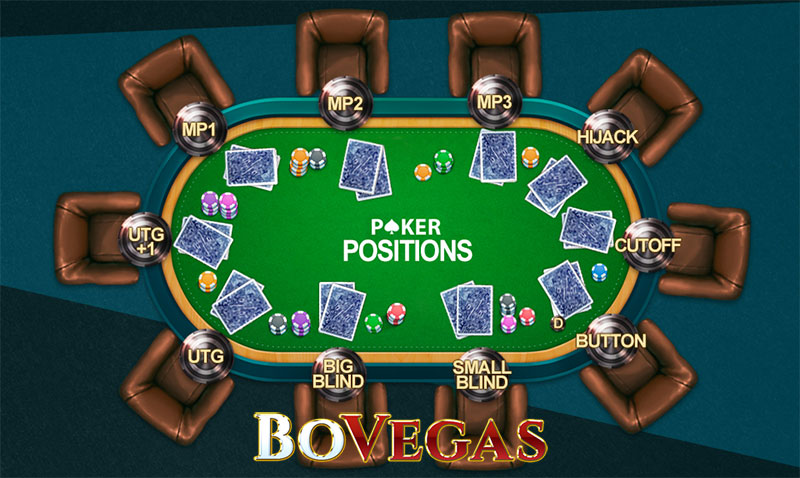 As we mentioned earlier, the relative rank of your starting cards is an important factor in determining which hands you are going to play. But it’s not the only one! Your position at the table is also critical because it directly impacts how easy your decisions are going to be throughout the hand. In short, being in late position is more advantageous than being in early position. Now, before we explain, why your position is so important, let’s begin by defining what a position is.

In the simplest terms, your position in the hand is always defined as your relationship to the button. Let’s take a ten-handed table for example. 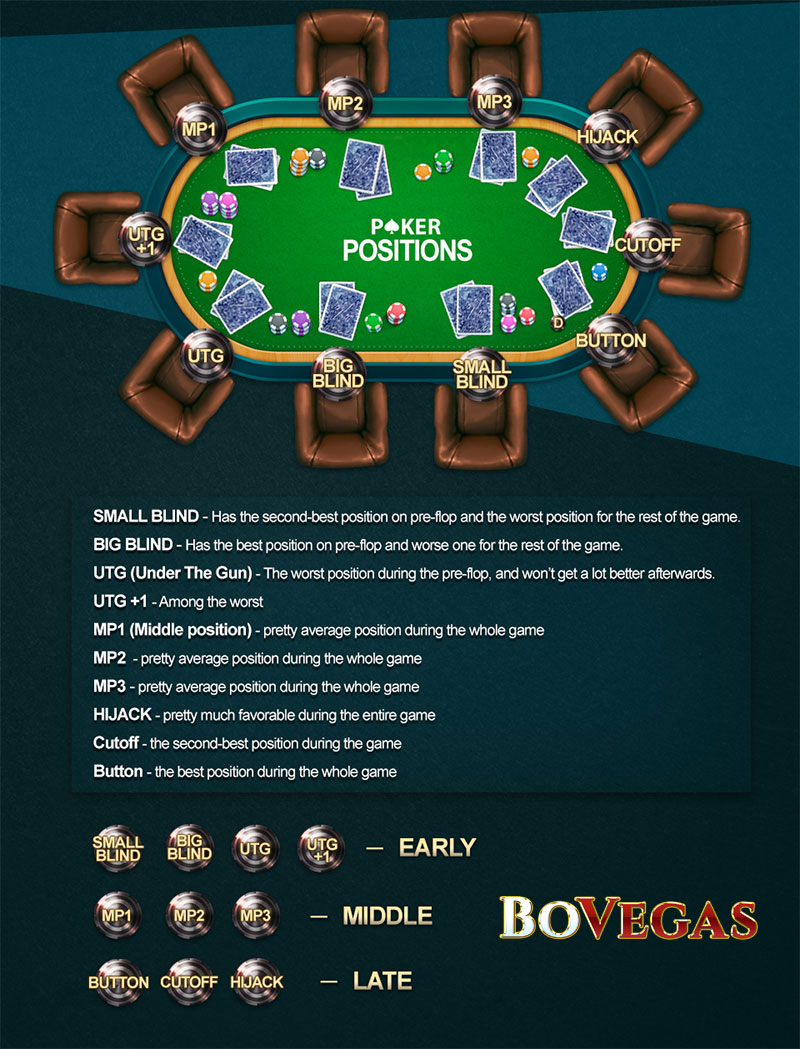 At a ten-handed table, the three seats just at the left to the big blind will comprise early poker positions at the table. So if the player on the button is at the seat #10, the player who is first to act preflop is the player at seat 3 followed by seat 4 and seat 5. Now, the middle position would consist of just players seated in seats 6 and 7. And the players in seats 8, 9, and 10 are set to be in late position. Now at this particular table, the player in the 8th seat is sitting in the hijack, while the player in the 9th seat is sitting in the cutoff, and the player in the 10th seat is on the button, which is obviously the best position at the table. Now the two positions to the immediate left of the button are the small blind and the big blind respectively. Preflop, the players and the blinds have the luxury of acting last in the hand. However, after the flop, if they’re still in the hand, the players in the blind are now going to have to act first, and they really do need to take that into account.

So now that we understand what a position is, let’s look at why it’s so important. In this example, the player in the 3rd seat is in great danger. He’s technically in the worst position, because he has to be the first person to decide if he’s going to voluntarily put his chips into the pot, with seven players, not including the players in the blinds left to act behind him! This means there’s a big chance that someone else may have a strong hand that they may want to raise or call with. Since the player in the 3rd seat has no information about the strength of anyone else’s hands generally, he should only consider coming into the pot with a premium to very solid hand, such as a bigger pocket pair; e.g. an Ace and a King, or an Ace and a Queen. And as we move around the table, the remaining players will get to see the action that has taken place in front of them, making that easier for them to judge the relative strength of their hole cards. Plus, they are going to have fewer people left back behind them. Now, a player in the 7th seat may decide to open a pot for a raise with a very weak hand. It might be something even as low as fours, or King and Jack. If everyone in front of him folds, it is because there are only a few players left act behind him, and there are fewer chances of someone having a stronger hand, he can then open up his range. Now on the other hand if a player on a 5th seat raises, the player in the 7th seat may just decide to call with his smaller pocket pairs, in the hope of hitting a set on the flop; or maybe bluffing if he doesn’t hit, since he has positioned on the other player.

How to Act in Every Position

Now with this in mind, here are some general guidelines that help you determine which hands you should play in which position.

Many gamblers wonder whether it is possible to outsmart the technology behind online slots and ask themselves how to beat slots at the casino. Some are looking for magic tricks that would quickly bring big wins while others focus on calculations and deciphering the patterns of how slot machines work. At first glance, all of this […]