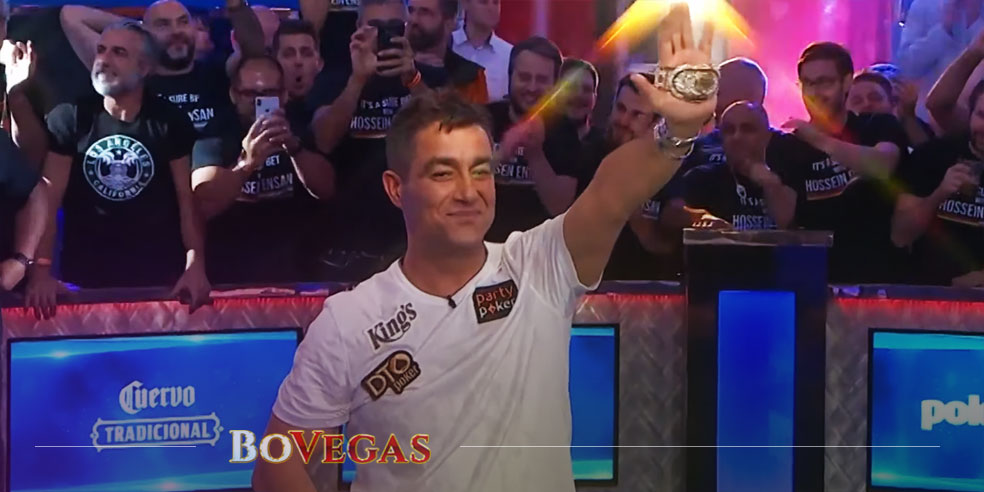 This year every dedicated poker player is casting an eager eye at the 2019 World Series of Poker. The main poker event has gathered thousands of professional punters who wanted to get to the WSOP Main Event. Las Vegas just hasn’t seen a tournament like this before! And no wonder, as the WSOP 2019 is marking its 50th anniversary.

Being the champion of such a special tournament is one of the greatest honors in the world of gambling. This is why the winners of the Main Event will always have a special place in the history of poker. This time, its the name of Hossein Ensan, who made a history of the poker tournament. If you have never heard of him, here are some interesting facts about the man who cashed out a whopping $10 million prize at the final table.

How It All Started?

This famous German poker player was born in Iran in 1964. At the age of 25, he decided to move to Germany, which has been his home country ever since. Currently, he resides in the city of Munster. Hossein Ensan used to work as a painter before taking poker professionally. He had been playing poker since he was 18, but he began chasing the career of the professional punter in 2012. His winning record is not that big; however, it’s quite significant for a player who only recently started his career in poker.

One of the main tournaments won by Hossein Ensan was the seniors event at the European Poker Tour in Barcelona. A week later he finished third, scooping as much as €652,000 at the final table in 2014. After his win in Barcelona, he decided to try his luck at the EPT Malta in 2015 and even made it to the final table; but in the end, he finished sixth. His adventures with EPT continued in Prague when he won the main event and bagged €754,000.

The next lucky year was 2017. He became a winner in a WSOP circuit ring in Rozvadov, Czech Republic. After this event, he accumulated around $2,6 million in profits. All in all, he participated in 36 tournaments before his historical win in 2019.

This year Rio All-Suite Hotel & Casino held this astonishing event. The tournament had an astounding variety of 90 bracelet events. The main $10,000 No-Limit Hold’em Main Event took place from July 3 to July 16 and was split into three rounds. There were 8,569 participating in it, making it the second biggest event since 2006. Each player started the game with 60,000 chips to get through the 10 days of tension and fighting for the main prize.

The Iranian born player entered the game confidently and was ahead of everyone else with his 100,000,000 chips. For a long time, it was only him and Kevin Maahs dominating the game.

Nevertheless, the final three-day battle happened between Ensan with his 326,800,000 chips, Alex Livingston with 120,400,000 and Dario Sammartino with 67,600,000 chips. Hossein Enson couldn’t count on the soft game, as Livingston began to shorten the distance between himself and Sammartino by taking pots and rapidly going over 100,000,000 chips again. Even though Livingston’s chances of winning were quite good, Sammartino managed to seize the gap with Enson. With his two pair on the turn, Sammartino managed to faze out Livingston, so the latter could not recover anymore.

The 2019 WSOP Main Event was special, as it all came down to an Italian high roller and a famous German EPT star. Both Ensan and Sammartino had 279,800,000 and 235,000 chips respectively. The fight between both of the players lasted for almost 4 hours until the last hand. Hossein Ensan got pocket kings and his opponent had a flush draw. Driven by the idea of semi-bluffing, Sammartino pushed his chips over the top of 33,000,000 chips bet from Hossein. When the river came, there was no chance for Sammartino to win and the poker main event was taken by Hossein Ensan.

His fans in Germany and also in Iran went wild the very moment they knew Hossein Ensan scooped a $10 million prize pool and $500,000 worth golden bracelet. This became the first event taken by the pocket kings. In his interview, Ensan told: “It’s unbelievable, I cannot understand this moment… I must go to sleep and wake up, and then maybe I know I have a bracelet.”

At the age of 55, he became the second oldest World Champion since 1999, when Noel Furlong won the main event at the age of 61. This is a very good sign for the game, as for 11 years it had been dominated by 26-year-old punters. It shows that everyone can become a champion at any age. Also, it shows that European punters still can hit major events all over the globe, then go to the Las Vegas Strip and rock their world!

What is more, this was the third time the Iranian born player has won this title. The last winners were Mansour Matloubi (1990) and Hamid Dastmalchi (1992). This victory put Hossein on the Top 10 Money List in Germany.

Dario Sammartino left the event with $6 million, while Alex Livingston cashed out $4 million. Sammartino said he left the tournament disappointed, as he wanted to win it. Nevertheless, he said that part of his money was going to be transferred for charity purposes. Alex Livingston told this time he felt much better than 6 years ago; this time he only focused on the tournament, so lack of sleep and food didn’t affect him this time.

Yet another discovery of the WSOP main event was the poker journalist Garry Gates who was the Pokernew live reporter. His game gathered fans all over the world, but he didn’t manage to make it to the final battle. The biggest evidence of his professionalism is a tweet from Chris Moneymaker, who expressed his high hopes for Garry Gates to win the main event.

For a long time Hossein Ensan stayed in the shadows, but after his magnificent game at 2019 WSOP, word got out on various social media. Among the first to congratulate the new champ was Phil Hellmuth. Also, Adam Levy tweeted that Hossein Ensan’s win was totally deserved, as the new star showed his unique blend of controlled aggression and street poker. He also outlined Ensan’s successful strategic domination, by way of some cunning use of mathematics. Every major media outlet has covered this glorious victory, to help introduce Hossein Ensan’s personality to the public.

If you ever decide to pursue the career of a professional poker player and have some real success just like Hossein, there are some questions you may have about WSOP.

This year, Hossein Ensan won the $10,000 No-Limit Hold’em Main Event WSOP event. This tournament has been held in Las Vegas on an annual basis since 1970.

The WSOP tournament took place at Rio All-Suites Hotel and Casino in Las Vegas. This has been the tournament’s favorite spot for many years now.

The buy-in is changing all the time. The $10,000 No-Limit Hold’em Main Event attracts thousands of players every year. And this is precisely how the tremendous million pots are created!

Phil Hellmuth has the biggest amount of WSOP bracelets, which is 15. Doyle Brunson, Johnny Chan and Phil Ivey own 10 bracelets each.

Each buy-in is the contribution to the general prize pools. When you pay it, the chips are granted to you instead. The chips have a monetary value. Most of the money is delivered to the prize pool forming the million-dollar winnings for the players.

Sic bo is a dice game of ancient Chinese origin. Roughly translated, the name of the game means “precious dice.” Unlike craps, another table game that involves dice, sic bo is played with three instead of two dice. Sic bo is rather popular in Asia. It is available in all land-based casinos in Macau, as […]

Bad Guys From Comics Who Love Their Casino Games

When luck comes your way, there is always the risk of losing big amounts of money to the government because of taxes. Both professional gamblers and novice players should understand the importance of paying taxes when hitting the jackpot. Under the US regulations, the money obtained from wagering is considered to be taxable income, which […]