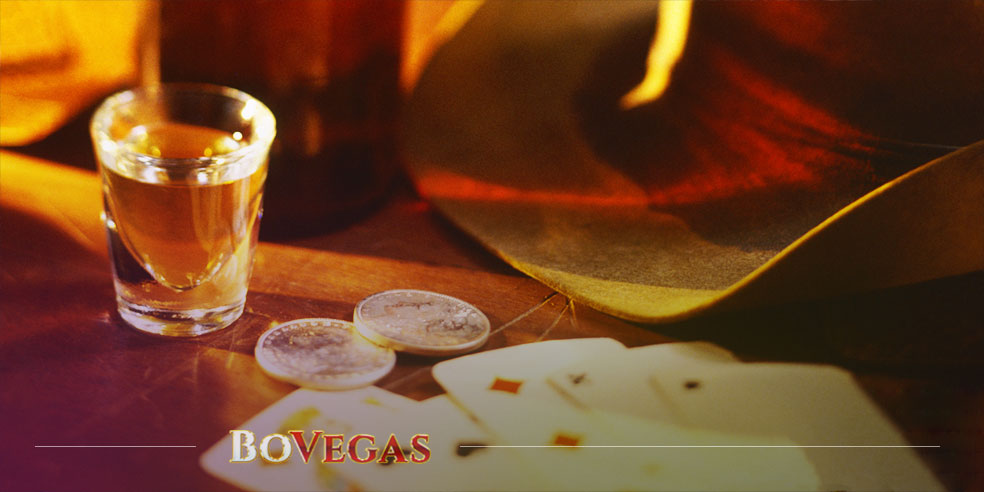 The United States is home to several popular art movements: Jazz, Blues, Country, and Western. So let’s talk a little bit about the last one. What’s your favorite Western? Is it one of those Clint Eastwood classics? Or maybe you don’t like cowboy classics and prefer something more exciting, like a Will Smith or Mel Gibson movie? Actually, it doesn’t matter, because all these movies have one feature in common – gambling! In almost all the tavern scenes, you can see people playing cards, drinking alcohol and shooting.

The concept of the Western way of life was formed upon the triple-W touchstones of the Old West: whiskey, whoring and wagering! And it’s the last one that interests us the most here.

Gambling eventually became an integral part of life in the Wild West; to such an extent, in fact, that even major conflicts and misunderstandings were commonly resolved with the help of a good old card game! 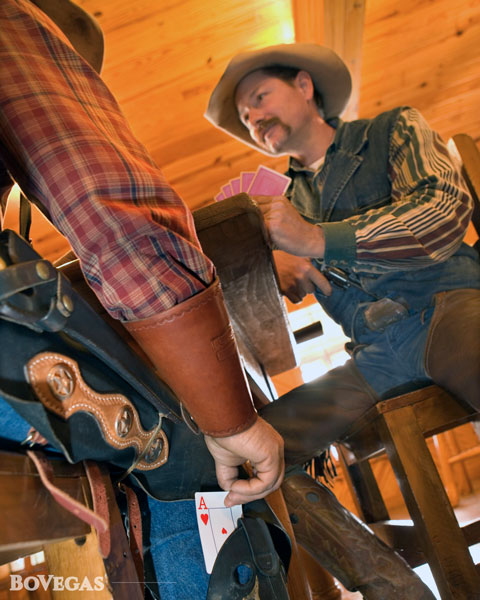 It all started a long time ago, when the American Frontier was just beginning to develop its first settlements and large cities. People were looking for something to distract themselves from constant fights and hardships involved in creating a new home for themselves and future generations. As a matter of fact, the first prototypes of saloons and brothels were created right in the tents where the “founders” lived. Then, with the growth of these settlements, they moved to large wooden houses that provided them with all the triple-W components. So as the community developed, new luxurious facilities appeared, just like in the movie Maverick with Mel Gibson.

These establishments were popular among both women and men, so they quickly spread across the Wild West. Most of them were recognizable at first sight: the large, elaborate facade gave spectators the impression these were the wealthiest buildings in the town.

In the early 19th century, before the Civil War, gambling thrived all throughout the frontier territories: Arizona, California, Colorado, Dakota, Idaho, Montana, Nevada, New Mexico, Oregon, and Utah. People flocked to taverns and brothels like moths to flames, making them perfect places to either drink or play all their troubles away.

The gold rush was one of the factors for the gambling boom in the west. San Francisco became a sort of mecca for Mississippi River town gamblers in the early 1850s. Gambling facilities spread across the town, and their doors never closed to new fortune seekers. The huge sums of money that California gambling houses saw during that period were beyond the imagination of a simple American citizen. 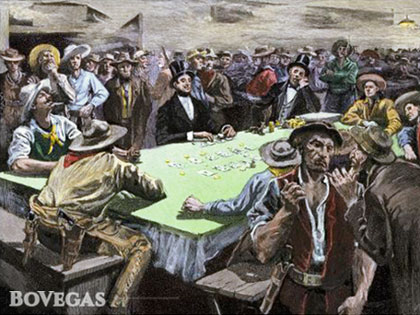 Let’s take Parker House as a perfect example of a wealthy establishment where professional gamblers made their fortunes. It featured tree faro tables, two monte tables, and one table for roulette. These were the most popular games during that time, and all reputable gambling houses would feature at least one table for each game. Also, there was at least one table for any other game; these were accessible to players based on their own personal choice.

To rent a room and conduct a gambling session in such an establishment, the gambler would have to pay at least $10,000 per month. That said, it has been estimated that in one day around a half a million dollars circulated from hand to hand at popular gambling houses.

There were three essential gambling games accessible almost at every brothel in the Old West: faro, monte, and roulette. However, those were not the only gambling choices available. For instance, poker, blackjack, and dice games were quite popular as well. You could also try your luck betting on sports events, horse racing tournaments; and as a supplement, you could organize a betting event of your own. For example, it was very popular to bet on a duel or a stand-off. Basically, you could bet on whatever you wanted, provided you gathered a crowd big enough to support the bet!

Let’s find out more about faro, the most played card game in the Old West. The game got this name because the gamblers played with cards depicting pharaohs on the backs. The game originated in France, and later it was adopted by Americans through New Orleans. The essence of the game is to bet on the card rank you choose. The dealer shows two cards – a winning card and a losing card; and according to your bet, you either receive a payout or your bet is collected by the dealer.

The game flourished particularly during the time of the American Frontier in the 19th century. In the early 20th century the game’s popularity faded, and it was last seen playing in casinos in the 1980s. Now, you can only see faro tables and layout at museum expositions across the American continent.

Monte was initially a Mexican national game that was introduced to Americans by the soldiers who fought Mexican-American war in the middle of the 19th century. The game is usually played with a deck of 40 cards. The point is to beat the dealer, just like in Blackjack. Here you have to bet on a matching suit of a pair of cards.

Poker in the Old West

Poker was and is one of the most exciting casino games of all times. Back in the 19th century, it used to be a little bit simpler; but in general, the rules haven’t changed dramatically, and the bluffing element was one of the essential components for a win. One of the main differences between the current version of poker played worldwide versus Wild West poker is the number of cards in the deck. There were 20 cards in the four classic suits.

Over the course of history, there have been a lot of shockingly intriguing stories about famous gamblers who were either scandalously successful or tragically unfortunate. Here are some examples of the most well-known gamblers of the Wild West. 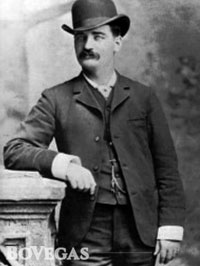 Bat Masterson was a professional gambler, lawman, army scout, and gunfighter living in Dodge City. He is mostly known for spending all his spare time and money in Leadville side by side with other famous players like Ben Thompson, Luke Short, Wyatt Earp, and Doc Holliday. Even though Masterson was later appointed a sheriff of a local county, he will always be remembered as a fierce gambler who spent way more time playing faro or poker, than fighting crime in the town.

This frontier gambler was one of the most successful faro players in the history of the Old West. He is particularly famous for bankrupting several casinos after winning enormous sums of money. Once he won $85,000 over a period of 6 months and had been consequently banned from most local casinos. 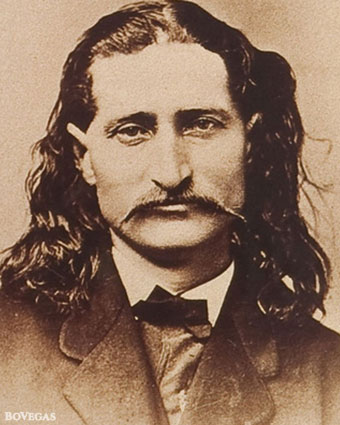 This man is most famous for his impeccable poker skills. You must have heard of the poker combination “dead man’s hand.” Well, Wild Bill Hickock used to hit enormous jackpots when he dealt with this hand.

His life and career ended when he was shot in a Deadwood Saloon where he was playing poker, but the “dead man’s hand” legend spread across the country as a testament to his remarkable talents.

At the beginning of the 20th century, most of the saloons and gambling houses closed their doors to opportunity seekers, with the rise of a more anti-saloon atmosphere, amid the establishment of new women’s suffrage laws. Nevertheless, the gambling culture continued to thrive and flourish in the states of Nevada and California.

Was gambling illegal in the 1930s?

The Nevada Legislature allowed all kinds of gambling in 1931, as they tried to lure more and more tourists to the area. Moreover, more than 20 states re-introduced horse racing events in the early 1930s.

What is the Wild Wild West?

Was gambling illegal in the 1800s?

Between 1700 and 1800, gambling was illegal in most US cities. Almost all southern cities prohibited gambling in 1830s, although some facilities made an exception for a respectable gentleman.

The Wild West, as we know it, looks like a place full of gunfights, cattle roping cowboys and prosperous and lawless mining towns where everything changes in a blink of the eye. This is the country where gamblers like Wyatt Earp, Soapy Smith, Bat Masterson and John Henry Holliday had the time of their lives. […]

The Origins of Craps

People have been gambling all the time, on every continent, and in every type of society. Don’t ask us why. We just do not know. What we know is that the majority of the games are too old to be traced down to their roots and origins. But mankind has always tried to solve all […]