Casino Waiters and Croupiers: What Future Awaits These Professions? 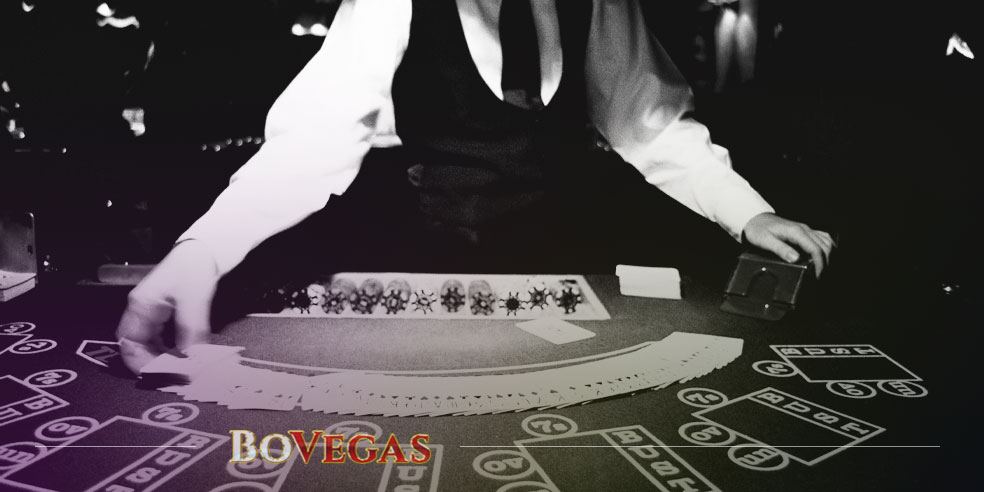 Traditional brick and mortar casinos are gradually becoming old-fashioned. The most significant changes have occurred with the advent of the Internet: now people can play on their devices with ease, as if they were on the casino floor of an actual offline venue. The introduction of new technology, a truly omnipresent phenomenon, was a breakthrough in terms of accessibility for players. But, at the same time, it has had a big impact on land-based casinos. Indeed, it has already made traditional venues rethink their own operations.

For instance, the management of Sands Venetian casino in Las Vegas decided to purchase 150 robots, as each one of these individual machines was going to cost much less than the salary of one croupier per year (about $25,000). And in the future, they want to replace all their croupiers with robots, since the latter can work for longer periods of time than human workers. 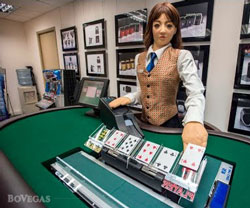 Robots can be perfect croupiers: they don’t need smoke breaks, they won’t be contemplating theft any time soon, and their only intention is honest work! We all know that sometimes, the work of human croupiers can be hindered by the human factor; and the machine, in turn, is also capable of impartially accepting bets at the blackjack table, shuffling and handing over cards, not to mention counting points. Besides all this, the robot can simultaneously perform one or two different tasks with their hands.

The robotic future of casinos has already arrived in Tokyo. Croupier robots were detected in an underground casino in the fall of 2019.  A robotic arm made in Taiwan was dealing cards to betting players. The owners of the casino were arrested, and police pointed out that they had been operating for a year, saving big amounts on salaries for employees by using a “croupier robot.”

About five years ago, Paradise Entertainment, a Hong Kong-based manufacturer of casino and slot machine equipment, presented the Min croupier robot at an industry exhibition in Macau. This very special robot was actually able to deal cards! The functionality of the model was still somewhat limited; but in the future, the developers promised to teach the robot some more important skills. They will be able not only to recognize cards and deal them, but also assess the emotional state of the player as well! The robot will be able to recognize regular customers and talk with them in their native language. Hong Kong claims that soon Min and its clones will appear in the US and other countries where people are forbidden to work as croupiers, but where electronic casinos are allowed.

So, there’s no doubt that traditional casinos are gradually turning into modern ones. Yet while eSports and other types of online entertainment are certainly capable of changing the perception of casinos, robot croupiers are going to make the most significant difference in this area. And of course, croupiers are not the only profession where there is a risk of workers being displaced by machines. Indeed, some developers are already thinking about how to place robots at bars.

The ability to keep many recipes in mind is one of the grounds for replacing the bartenders commonly to be found in casinos and other institutions. The Somabar robot can be easily trusted with the task of creating alcoholic cocktails. In order to avail of its services, you need to find in the menu and choose one of 300 recipes, the cocktail will be ready in a matter of seconds. In the summer of 2013, another robot bartender, RAPIRO, raised $75,000 on Kickstarter, with an initial goal of $20,000. RAPIRO can accept orders through Wi-Fi, a tablet, or a smartphone. The customer can select a recipe and add components. In the future, the robot will be able to make a drink and receive payment by electronic card. 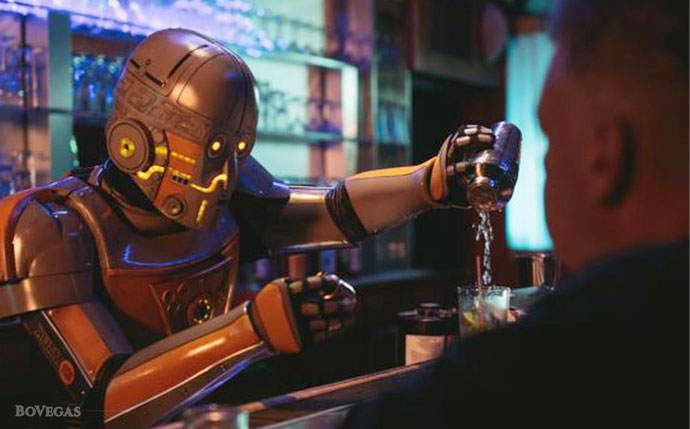 What about making 800 cocktails a night? Not a problem for the Italian robot Nino, that can quickly create a drink in line with any recipe suggested by the client. In total, Nino has 170 bottles of alcohol at its disposal, from which it can make any classic version of a cocktail or mix something new. The robot accepts orders through a mobile application where the customers can come up themselves with original recipes and also choose options for existing ones.

Nino looks like two robotic hands, one of which mixes, and the other pours and serves cocktails. This mechanism has been employed for several years in Royal Caribbean hotels and cruise ships. During this time, the robots managed to make about a million drinks!

This kind of robot won’t be able to chat with customers, but it will still significantly save time, leaving plenty of room for creativity in terms of inventing their own alcohol recipes. The creator of the project, Carlo Ratti, claims that Nino was not created in order to replace workers at the counter. One of its tasks is to make people more familiar with robots at the household level. 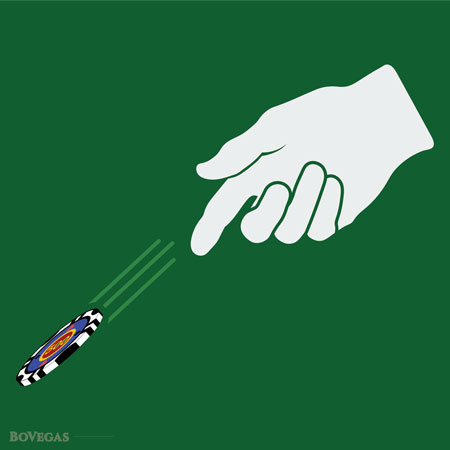 However, what about waiters? Founded in 2017, California-based Bear Robotics is developing the Penny robot, which serves as a waiter, delivering dishes from the kitchen to the lounge. The autonomous robot weighs 33 kg and can work up to 12 hours without recharging, moving cargo weighing up to 30 kg. The company has not yet launched mass production, but the robot is already being tested in several restaurants and casinos. The company managed to raise $32 million through venture funding.

Apparently, such machines will not be able to completely replace workers in the casino, since the casino atmosphere involves lively communication and exciting gameplay. A lot of people will still prefer the traditional casino system. But technological changes are still coming, and robotization is definitely going to challenge some of the professional roles we commonly associate with casinos.

Related Posts
The Evolution of Mobile Gaming Apps and Gambling
Australian Gambling Events
Around Half of UK Students Rely on Gambling in Ord...
Native American Casinos: How Do They Work
Tags: Casino, Dealer, Gambling, Robots, Technology, Unemployment
Popular Posts
The History of a Card Deck and Its Symbolism
41626 views
The Biggest Casino Wins of All Time
34408 views
Insightful Baccarat Guide
24876 views
Roulette and Probability Theory: Math That Gets Interesting
18846 views
Top 10 Movies About Lottery Winnings
17865 views
Last Posts
Origin of Casinos and Their Development Up to Present Days
532 views
Greyhound Racing: History, Interesting Facts, Betting
435 views
How Will Casinos Look in the Future?
464 views
History of Gambling In Ireland
401 views
The Symbolism and Spirituality Behind the Card Deck Suits
468 views

Can you imagine dozens of players bagging million dollar jackpots in one day? Well, this is what you may just see at the World Series of Poker (WSOP) or any other major tournament. This year, WSOP is celebrating its 50th anniversary from May 28 to July 16, 2019. There are 89 bracelets to be awarded […]