HOME / Casino Wiki - The must-read articles for newbies / Small Casinos vs Casino Giants: Where It Is Better to Gamble

Small Casinos vs Casino Giants: Where It Is Better to Gamble

Any question like “where is it better to…” implies that people know what “better” really means. But in terms of casino gambling, it is never easy to tell! What is the best playing experience casino goers might be looking for? What counts as true customer satisfaction? What are the places to better provide it – small venues or casino giants? Where is it generally better to gamble: at the best-rated casinos in the USA or at a small venue? Before trying to find out where is the largest casino in the United States let’s take a look at the peculiarities of the both casino types.

Every casino patron wants to catch their winning streak, but it is practically impossible to tell whether small or big venues offer better chances for it. Math-wise, gambling works pretty much the same way in both small and big venues. This means that, as far as your chances of winning are considered, we should consider them all generally equal. And the games offered are basically still the same – except that bigger casinos offer a broader variety of games of course!

Gambling Environment: What Makes the Difference

But despite this similarity, the gaming products offered in small and giant venues are, in fact, very different; it’s not just a matter of the games alone, but also the broader gambling experience. These experiences include the whole range of emotional impressions, thrill and enjoyment related to the atmosphere of casino floor. Every venue provides its own individual mix of casino gambling experiences, and casino patrons do need to take this into account when deciding on where to go.

Venue characteristics and features influence not only the choices gamblers make about where to play, but also their choices about how to play – in other words, playing strategies, tactics, and behavior!  And that is what casino patrons seldom realize. There have been many studies on how casino environment hold sway over the conduct of gamblers; and this is where small casinos and big casinos also differ considerably, because of the very nature of their environments!

Both kinds of venues have three different groups of visitors: the gamblers, the onlookers and unconcerned. It was found that in the presence of other gamblers, casino patrons generally tend to intensify their betting. The company of onlookers somewhat reduces the average bet size. The unconcerned visitors, like those who come to the venues to dine, or just pass by on their way to other entertainment locales, do not have a big influence; with only a few exceptions. Even so, such factors (along with any other ambient influences) still deserve some close attention here, as they do work a different way in small venues versus the more grand-scale casinos out there!

Gamblers might enjoy the environments of giant venues. Because of this, they are often prepared to travel considerable distances to gamble (such as casinos in Las Vegas or Atlantic City), and they do make sure to plan such visits well in advance! The noise, the crowd, the lights, and the company of all the other gamblers sharing the same feelings and emotions provides precisely the kind of atmosphere and experience casino patrons really like. But the bigger the casino is, and the more gamblers are attending it, the more often the winnings are announced and the more we can hear the babble of excited voices; and this definitely gives the clients an additional push towards more intensive betting. 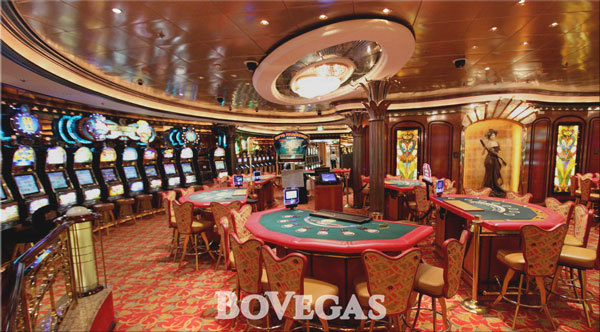 This push is an inherent part of a giant casino ambiance, bearing a soft and subtle message: “other people win lots of money here.” But casino goers don’t tend to realize this in a very direct and explicit way; it’s just something implicit, that they sense on a very deep level. Not unlike the true spirit of competition which has a truly intoxicating effect upon the gamblers, who are surrounded by many people just like them, feeling exactly the same feelings – if, of course, they are the kind of person who enjoys such crowded spaces to begin with. Generally speaking, being surrounded with a crowd of people doing the same things and having the same emotions is a remarkable experience. But in the long run, it leads to higher losses. Nothing comparable is felt in small venues with a small company of gamblers quietly playing table games, slot machines or video poker.

Small vs Giant: Which Venues Are More Dangerous??

There have been allegations that small venues like clubs and pubs are more dangerous compared to big casinos – in terms of easier accessibility for “problem” gamblers, lower level of personnel training and casino security, the difficulty smaller venues generally find in adhering to responsible gambling procedures, etc. However, as the casino business is very competitive, we should realize that not everything that is written about it should be considered as fully trustworthy – even if it is written by industry professionals!

Yes, a compulsive gambler who is well enough aware of his problem and decides to avoid the huge casinos of Vegas could still be tempted by a small club on the next corner – just to sate his cravings, which is undoubtedly quite alarming.  But this is not a problem relating to small venues vs giant casinos; it is a problem with this particular customer. And maybe the company of the gamblers he is going to meet in that pub will actually reduce the ‘doping’ effect of gambling that makes us numb and indifferent towards the prospect of heavy losses;  and this can actually be quite a different scenario, compared to a big casino with all its buzz.

Another difference is the onlookers. Some gamblers just don’t like being watched, and that is why they would choose small venues, rather than crowded ones. Others enjoy being in the spotlight, where many people can watch them playing; this brings them a feeling of being a skillful performer; or even just a lucky person, which is also a great feeling! And small venues are hardly able to provide such feelings for their patrons. So in this case, giant casinos are actually the best choice!

Some studies indicated that when gamblers feel they are watched either by onlookers or other gamblers who are simply moving around the space, their playing tactics might also change a little. The bet size becomes somewhat lower, but the bets can also be made more often; probably because the gamblers would want to expose more wins, albeit of smaller size, to the crowd – and here no one can say whether this is done consciously or not. But the audience does matter! Compulsive gamblers, for example, choose to be more avoidant in front of bigger crowds. However, they can be more persistent as the losses grow – but again, this is not the fault of the venue, of course.

The same relates to the more unconcerned visitors of giant casinos. One interesting finding is that these gamblers also exert an influence on the gambling styles of the venue, even if they are just passing by, or are just slowing their pace as they walk to a nearby food or concert area. They represent a kind of audience that somehow restricts the betting intensity of the actors – maybe because exposure to the kind of alienated audience the gamblers would prefer to seem not only lucky and skillful but also reasonable. And this is the exposure only giant casinos can provide.

The differences between small venues and giant casinos in the atmosphere and emotional environment are so considerable that casino patrons do have a pretty big choice to make. But making their decision, they should also remember that gambling places do influence the behavior of gamblers; that that is why you need to choose as wisely as you can!

Tour de France: a Bookmaker`s Guide You`ve Been Looking For Ooh, Le Tour de France. There is something about this name that makes you want to pronounce it with a fake French accent. Let`s admit that all French words sound charming except for such linguistic creations as épanouissement or feuilleté. Don`t bother trying to deal […]